Whether political freedom or economic freedom is more important is a moot question.

The most basic property right is self-ownership. To the degree that right is compromised, so is freedom. A commenter at the linked article above noted this:

Beyond the unabashed wealth redistributionism of a Bernie Sanders, ‘unrequited appropriation of the labor of others’ includes all forms of rent-seeking: Regulation favoring entrenched business (from tariffs to requiring hair braiders to take hundreds of hours of training, to subsidies for solar panels, movies, art, mortgages, etc., etc., etc.); union shops; civil asset forfeiture and eminent domain; and zoning laws.

We may agree politically to give some portion of some of those freedoms to the State, but we will, by definition, be less free; and bureaucracies will always take more than is granted.

Principled resistance to the looting is a requirement of freedom.

Michigan altercations provoke our indignation, elevate our blood pressure, dismay us and inspire us to avoid large gatherings of union thugs. Michigan’s union halls, large manufactories, public schools, government departments and more are stuffed with people yearning to be free. But felonious assault, is… Pure Hooligan. 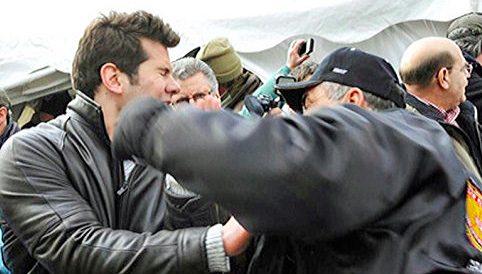 That guy’s face is on camera, and the union logo on his jacket is easily identifiable. The authorities response will be of interest.

He may want us to know that, and he may not be a liberal. What he is not is a conservative. He’s a “Republican” who favors unionization forced by government

As a recent example, he co-sponsored Senate Bill 731, legislation that would transfer $6.6 million in taxpayer money to the SEIU government employee union. It did it by creating a government “employer” for about 42,000 individuals who are hired by elderly or disabled Medicaid recipients. The Mackinac Center has filed a lawsuit over a similar set- up involving home day care providers.

He wants us to focus on the “big picture” and not on his “voting record from 6 years ago.”

In the 2010 election cycle Sen. Richardville was the Republican with the third largest donation total from the MEA.

Sen. Richardville cast a vote for corporatism in May of 2010, preventing the owners of a Michigan insurance company from selling their own investment.

I suspect he’ll get along fine with Rick Snyder. I hope I’m wrong about Snyder.

This undercover report, by a Wired reporter, discusses his experience working for Walmart. The story has been noted elsewhere. However, if you have not read it, you should. REALLY, it’s educational. Especially if you are one of the union robo-activists trying to destroy it. Think of your children, now that the UAW is dying or at least entering a phase of internecine warfare with the SEIU.

FLY ON THE WAL

The Lansing area UAW just finished a month-long local strike here in the economically worst performing state in the Union. American Axle workers in Hamtramck are voting on whether to end an 87 day strike. The UAW is also just coming off a strike in Kansas.

In the mid 60s I worked on the line at the GM Fisher Body plant in Lansing, building Oldsmobile F-85, 88 and 98 chassis on two different assembly lines. When our chassis rolled off the end of the line they were transported to a different plant by truck to be mated with the drive-train and frame. The engines were built in a third facility. Times have changed, more so where the UAW does not hold sway.

And it doesn’t matter if it is manufacturing windmills, Jennifer.

ZURICH, Switzerland: Swiss bank UBS AG said Wednesday it has sold subprime and other mortgage-based securities with a nominal value of US$22 billion for US$15 billion (€9.5 billion) to a newly created investment fund run by U.S. asset manager BlackRock Inc.

The sale is part of an attempt by Switzerland’s largest bank to offload risky positions that contributed to its massive writedowns of US$37.4 billion over the past nine months.

The securities had a nominal value of about US$22 billion (€14 billion), but have been listed with a book value of US$15 billion since March, UBS said. Investors have shunned mortgage-backed securities over fears too many of the mortgages were made to people with shaky credit who may eventually default.

We have a short, clear analysis of this transaction from an anonymous tipster:

The mortgage industry’s lunacy at its finest.

UBS loans billions to a hedge fund so the hedge fund can in turn, buy crap loans owned by who else, but UBS!! Oh, and the purchaser is 49% owned BY Merrill Lynch, a fierce, cut-throat competitor of UBS.

Tip of the Hat for both stories.