In response to the U.N. Human Rights Council’s vote last week to outlaw criticism of religion in a resolution that mentioned only one religion specifically, I thought it would be a good idea to put forward some criticism/insult/mockery of every religion. Images seemed appropriate since this nonsense has its origins in some cartoons of Mohammed published 2 years ago.

What I needed then, were cartoons or photos for Buddhism, Christianity, Hinduism, Islam, Jainism and Judaism. I decided to skip Wicca, maybe that’s an insult in and of itself. I also didn’t look specifically for Sufism as a separate religion from Islam, and I’m pretty sure that is an insult. Likewise, various sects of Christianity are lumped together. Fortunately, Christianity in all forms is easy to insult with a single image.

Insulting and mocking images of either Christianity or Judaism greatly outnumber those targeting Islam. Hinduism is a distant 4th, though I did turn up something. Buddhism seems to indulge in mild self-mocking, but the only real insult would be pictures of the Taliban blasting ancient statues of Buddha with artillery. I thought that might actually be considered doubling down on Islam, so didn’t include it. For Jainism I could find nothing. Anyone out there who can fill in the gaps, let me know.

Let’s go at this alphabetically. First up, Christianity: 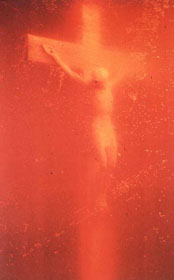 That’s “Piss Christ” by American photographer Andres Serrano. It’s a small plastic crucifix is submerged in a glass of the artist’s urine. Serrano’s photograph won a prize from the National Endowment for the Arts. Nobody rioted, died or put a price on Mr. Serrano’s head over this. The NEA wasn’t shut down. I went with this instead of the exhibit of the Virgin Mary smeared with elephant dung for its more universal character. I also considered this cartoon. Warning, not family friendly.

On to Hinduism. This is an artist’s depiction of the Goddess Saraswati in the altogether.

This image is associated with the only non-Islamic reference I found (I wasn’t really looking) to putting a contract out to kill an artist. Little known Hindu outfit offers Rs 51 cr for Husain death

More on that controversy here. Rs 51 crore is 510,000,000 rupees, around $10 million USD, and is a popular number for killing artists in the name of insulted religions as demonstrated here in another Indian case, but with a different religion.

Which brings us to Islam:

I like this because it mocks the UNHCR, too.

Next Jews. Really hard to choose from such a wealth of material, but you have to like this one in light of the Muslims at the UNHCR passing the resolution that singles out one religion by name for protection.

Especially when you find out this logo was created by an Israeli to mock the Iranian contest.

So, how did it come to pass that the UNHCR decided religion needed protection from criticism? UN body OKs call to curb religious criticism

The U.N.’s top human-rights body approved a proposal by Muslims nations Thursday urging passage of laws around the world to protect religion from criticism.

The proposal put forward by Pakistan on behalf of Islamic countries – with the backing of Belarus and Venezuela – had drawn strong criticism from free-speech campaigners and liberal democracies.

A simple majority of 23 members of the 47-nation Human Rights Council voted in favor of the resolution. Eleven nations, mostly Western, opposed the resolution, and 13 countries abstained.

…”Islam is frequently and wrongly associated with human rights violations and terrorism,” the resolution said.

Here we have a resolution purporting to defend human rights by suppressing freedom of thought, brought by a religion that considers women to be third class citizens and whose adherents riot, threaten cartoonists and writers with death, glorify suicide bombings of civilians and call for beheading those who mention any of that. 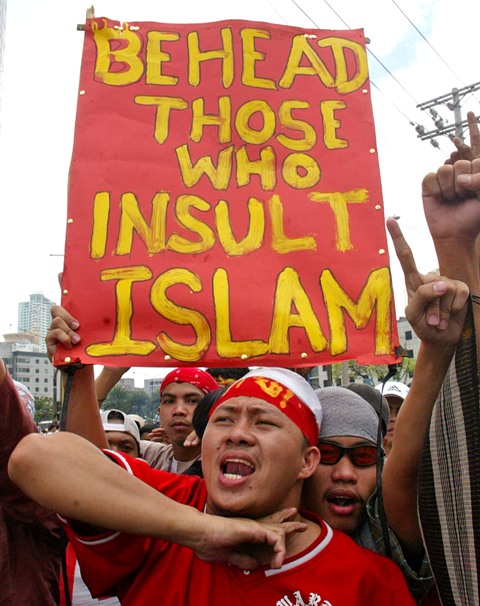 Apparently, these UN HCR Muslims lack a sense of irony as well as a sense of humor.

Do you think this resolution means the Muslims who voted for this will cease calling for Israel’s destruction because Jews are Apes and Pigs? Me neither.

…”It is individuals who have rights and not religions,” Canadian diplomat Terry Cormier said.

India, which normally votes along with the council’s majority of developing nations, abstained in protest at the fact that Islam was the only religion specifically named as deserving protection.

Thanks to Canada, but why are they even participating in this buffoonery? And what, India, is meant by “inappropriate” linking of religious criticism to racism? What would be appropriate? I’d like to post an example.

The United States did not vote on the resolution because it is not a member of the council. The Bush administration announced it was virtually giving up on the body and would participate in debates only if absolutely necessary because of the Geneva body’s anti-Israel statements and its failure to act on abuses in Sudan and elsewhere.

U.S. diplomats resumed their observer role in the council after President Barack Obama took office, though it is unclear whether Washington will stand for one of the 18 council seats up for election in May.

And if the US were to rejoin such a body, what would that mean?

Eleven countries voted No: Canada, Chile, France, Germany, Netherlands, Slovakia, Slovenia, Ukraine, Switzerland, United Kingdom, and Italy, while 13 abstained, including Bosnia, Brazil, and Mexico. Since the Yeas were 23 out of 47, and a simple majority was required, it’s the abstainers who should be blamed.

Update: 2:20PM No word yet on whether Mexican Christians will riot over SecState’s ignorance.

Over at Tim Blair commenter Dave S. has an interesting thought on bitter folks clinging to religion:

Well, I do go a-churchin’ every Sunday with a bunch of bitter folks who complain about how the government is evil and screws them over, and we yell an’ whoop it up when the preacher rails against them Italians and Jews, an’ then we…

Oops, wait a minute, that’s not me, that’s Barack Obama.

I wish Dave had worked foreign trade in there, too, but it’s still an A+.