If you think so many around you are insane, maybe it’s not them.

Obama “honors” Rosa Parks, then Nelson Mandela – by making it about Obama.

Everything is not always about you, Barack.

That might have been better rendered “is a perfect example of San Franciscan values.”

…there is no doubt that the city’s best interest rests with Democrats maintaining control of the U.S. House of Representatives.

As speaker, Nancy Pelosi has used her powers of prerogative and persuasion to help San Franciscans get what they want out of Congress, in terms of both philosophy and funding for specific projects.

…It’s in San Francisco’s best interest to keep Nancy Pelosi in Washington, working for the city’s values and needs. It’s in the nation’s interest to keep her as speaker of the U.S. House of Representatives.

“[U]sed her powers of prerogative and persuasion?” That would be better rendered as “her powers of bribery and bludgeoning.”

The Chronicle has succumbed to the pathology of narcissism afflicting Democrats in general and Pelosi, Reid and Obama, in particular. San Franciscans who place their interests before the nation’s will certainly expect the rest of us to bail California out of its Greece-like economic disaster. While Nancy Pelosi’s re-election may be in San Francisco’s best interests, it certainly is not in ours.

San Franciscans may believe that the rest of the country should be just like them:

…but it is obvious the following SF statutes must have been repealed or Nancy Pelosi would not be able to campaign from a soap-box on any street corner in the city:

The rest of the country is poised to tell San Francisco we want Pelosi off her soap-box and off the streets.

There’s a pipe spewing a gazillion gobs of oil into the gulf, so let’s build more windmills

Local gulf coast officials are tearing out their hair trying to comprehend and comply with seventeen (as in seven more than 10) federal agencies falling all over themselves to do The Boss’ bidding and help and impose and superimpose their visions and regulations on what is a war zone with hundreds of ships and some 30,000 people involved, many of them frightened. And all of them inexperienced on a disaster of this scale.

3 Reasons Obama Should Kick His Own Ass

…the federal government is a major player in the problem for at least three reasons:

1. It owns the property on which the oil well is located.
2. It regulates offshore drilling. And
3. In order to protect small players in the drilling industry, it capped economic damages from this sort of spill at just $75 million, a way-too-low cap that encourages risky behavior.

Reason 2 begets reason 4, which would be the regulations that prevent continental shelf or land based drilling, where a spill is relatively easy to plug and clean, and without which the Deep Water Horizon would not have been necessary.

Reasons 5 though 8 would be the protectionist Jones Act, the Fed delay in permits for Louisiana to build barriers, the Feds inability to get miles of boom from warehouses in Maine, and legislators wasting time with BP lobbyists who wanted a cap-and-tax bill. Regulation ad infinitum, and planning more.

Reason 9 would be stopping the burning of the oil because of air pollution concerns. In other words, being unable to make a reasonable risk assessment trade-off.

So, right. We need more regulation. And windmills. Set up just behind Obama’s teleprompters. And we need unicorns running constantly on giant, grid-connected hamster-wheels.

Finally, he throws out a bunch of legislative and regulatory trial balloons all based on breaking our “addiction to fossil fuels”. Like “raising efficiency standards in our buildings” – straight out of the House bill which would require a federal inspector to OK your house before you could sell it to ensure it meets all fed standards.”

The attention of such persons, however, being always principally directed, not to the standard of ideal, but to that of ordinary perfection, they have little sense of their own weaknesses and imperfections; they have little modesty; are often assuming, arrogant, and presumptuous; great admirers of themselves, and great contemners of other people. Though their characters are in general much less correct, and their merit much inferior to that of the man of real and modest virtue; yet their excessive presumption, founded upon their own excessive self-admiration, dazzles the multitude, and often imposes even upon those who are much superior to the multitude. The frequent, and often wonderful, success of the most ignorant quacks and imposters, both civil and religious, sufficiently demonstrate how easily the multitude are imposed upon by the most extravagant and groundless pretensions.

Further thoughts on the question from Mark Steyn: This job, too, is beneath Obama

Update: 3:45PM
I had intended to include a link to this excellent Dorothy Rabinowitz piece: The Alien in the White House

Obama to campaign for Coakley

On Sunday. That means there are 2 days for analysis.

Whether the President will actually appear with Coakley, or she with him, is not known. Critical mass of implosion may be achieved.

Creigh Deeds and John Corzine could not be reached for comment. David Axelrod is on extended leave. Hillary has been hospitalized due to incessant chortling. Two new teleprompters have been purchased for use after the Massachusetts election due to superstition on the part of the CinC; JIC.

Barack Obama rates this a solid B+. 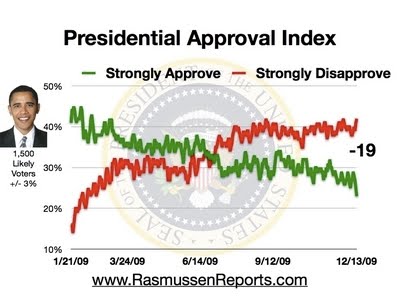