You should read them both in full.

The Quiet Coup
in the Atlantic by Simon Johnson

The crash has laid bare many unpleasant truths about the United States. One of the most alarming, says a former chief economist of the International Monetary Fund, is that the finance industry has effectively captured our government—a state of affairs that more typically describes emerging markets, and is at the center of many emerging-market crises. If the IMF’s staff could speak freely about the U.S., it would tell us what it tells all countries in this situation: recovery will fail unless we break the financial oligarchy that is blocking essential reform. And if we are to prevent a true depression, we’re running out of time.

Wall Street on the Tundra
in Vanity Fair by Michael Lewis

Iceland’s de facto bankruptcy—its currency (the krona) is kaput, its debt is 850 percent of G.D.P., its people are hoarding food and cash and blowing up their new Range Rovers for the insurance—resulted from a stunning collective madness. What led a tiny fishing nation, population 300,000, to decide, around 2003, to re-invent itself as a global financial power? In Reykjavík, where men are men, and the women seem to have completely given up on them, the author follows the peculiarly Icelandic logic behind the meltdown.

It may be time to consider these lessons in some detail.

Like Oligarchy, oweligarchy is a form of government where power effectively rests with a small elite segment of society. Oweligarchy, however, is distinguished from its homonym by a haughty elite who are spendthrift statists, bitterly dedicated to the permanent impoverishment of the non-elite, and who may be further characterized by their affinity for home grown arugula, wagyu steak and tendency to drift into kleptocracy.

In its treatment of business the United States is now fully equivalent to Russia’s handling of Gazprom. In sucking up to government many US businesses are equivalent to the crony capitalists in Red China. CEOs of such firms in both Russia and China met with bad ends, ranging from long jail sentences to bullets in the back of the head.

So far, we’ve had two State Attorneys General threaten several dozen executives who had broken no law, encouraging the Red Guard ACORN to mount protests and others to make death threats. We’ve seen the firing of the CEO of a private business by the President, and Barney Frank has a bill to control the entire pay scale of any company who took federal money.

General Eisenhower warned us of the military-industrial complex only because he failed to foresee the unholy alliance of government with corporate welfare queen rent seekers promoting the sale of carbon indulgences offsets for their own aggrandizement at taxpayer expense.

Corporations don’t pay taxes, but some of them sure as hell increase yours through their lobbying efforts. I refer to the specific examples of the General Electric company and T. Boone Pickens. GE has been positioning themselves for years to collect handsomely on the sale of some form of carbon indulgence as championed by AlGore, and Mr. Pickens wants you to spend $70 billion on infrastructure and windmills so as to increase the value of his natural gas holdings, and the windmill parks he’s building. Such corporatist swine should not be confused with capitalists. They are more akin to the people “in charge” of the railroads under Mussolini, the punctuality of which, by the way, has been vastly overrated.

In 2008, the Wall Street Journal deemed the Warner-Lieberman Kyoto Protocol clone bill “the most extensive government reorganization of the American economy since the 1930s.” Sadly, they could no longer say that. Nor, tragically, this:

Thankfully, the American system makes it hard for colossal tax and regulatory burdens to foxtrot into law without scrutiny. So we hope our politicians will take responsibility for the global-warming policies they say they favor. Or even begin to understand what they say they favor. For a bill as grandly ambitious as Warner-Lieberman, very few staff, much less Senators, even know what’s in it. The press corps mainly cheerleads this political fad, without examining how it would work or what it would cost.

I have recommended The Suicidal Corporation in a previous post on corporatism. All of you out there driving Atlas Shrugged to #1 should read that next. 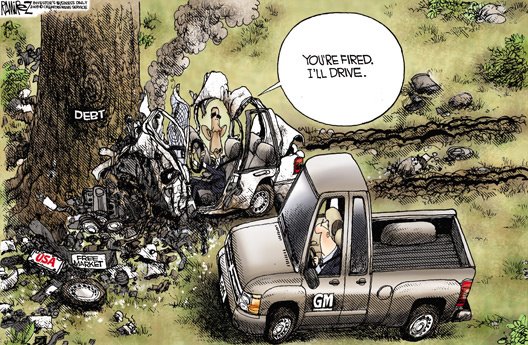 The spectacle of corporate magnates from Detroit pleading to be on Uncle Sam’s dole is a sordid one. So why aren’t more Americans appalled? One reason is widespread misunderstanding — much of it sowed by these auto makers — about the size of their firms. The Big Three, we are told, are “too big to be allowed to fail.”

This myth begins with the idea that GM, Ford and Chrysler are so huge that if they go belly-up, the livelihoods of a disproportionately large number of workers and suppliers would be affected. At once, the market for their services and products would close. Therefore, the argument concludes, government must prevent any such failures.

Bankruptcy doesn’t make assets — such as factories, machines, contractual options to buy raw materials, workers’ skills — disappear. If markets still exist for products produced by these firms, Chapter 11 is the best way to discover this. Some workers might lose their jobs and some suppliers might lose their markets, but there would be no industry-wide collapse of the sort portrayed by the bailout’s cheerleaders.

But what if refusal to bail out these firms results in their complete failure? Even then — especially then — the case for a bailout crashes. Really big firms such as GM, Ford and Chrysler are really big users of productive inputs, like rubber and steel. Almost all of these inputs have alternative uses and could be used by other firms or in other industries.

Read The Rest. Really worth it.