On the ground in in Atlanta.

Many pictures of BLM, ANTIFA and Trump supporters with commentary. 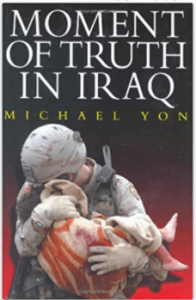 Michael Yon is in Afghanistan.

…Among the English-speaking troops, there seems to be a sense of mission. American and British officers with experience in Iraq, Afghanistan and elsewhere—leaders whose opinions I greatly value—do not think we are losing here in Afghanistan. Yes, they will acknowledge that the situation is deteriorating, but they still believe we are making progress. And it’s hard to disagree with them (though I do), given the blow that ISAF forces just delivered to the Taliban.

…There were no combat casualties, but one soldier had his pelvis crushed when a vehicle he was working beneath fell on top of him. But that doesn’t mean they weren’t fighting. Anywhere from 200 to 250 Taliban were killed trying to take out the convoy.

Read the whole thing and then hit the tip jar.

1- If you’ve read Michael Yon’s Moment of Truth in Iraq (and you should) you will probably take the following with caution. Security in Mosul is a big problem. It is Al-Qaeda’s last redoubt, however.

In Mosul, Al-Qaeda’s last redoubt, the group still held sway as recently as Easter. Now it lacks the strength to fight the army face to face and has lost the sympathy of most of the ordinary citizens who once admired its stand against the occupying forces and their allies in the Iraqi army.

If accurate, this is fantastic. “The surge” will have accomplished something almost unbelievable. Furthermore, this story is yet another you can’t find in the US Maim Scream Media™. RTWT

See Iraqis lead final purge of Al-Qaeda from the same source. Also, Fox news tonight had a reporter claim Al-Qaeda fighters in Mosul are down to 1,200 from 12,000. Maybe the defeat of Al-Qaeda in Mosul has happened. If so, and if we keep a presence there, Al-Qaeda is done in Iraq.

2- Apropos of last Wednesday’s comments on feminism and 14th Century cultures, here’s another way to look at Islamic feminism. With tongue firmly in cheek, TOC commented on this burgeoning phenomenon in January 2006: The Islamofeminist Chronicles.

We can hope it is the latter. The matriarchs of martyrdom: Islamofeminism’s gentle side. RTWT

3- Obama’s position pivots have become so nuanced that no one can any longer be sure what principles he stands for, if any. He has espoused diametrically opposed views of the right to bear arms, campaign finance “reform,” flag pins as a patriotic gesture, unconditional talks with heads of terrorist states – and he’s inching away from his absolute guarantee to cut and run in Iraq by some date certain.

So as long as a woman can get her “blues” classified by a medical health professional as “depression,” she has a right to a late term abortion no matter how strongly the majority of citizens feel about the immorality of destroying a fully viable human entity? And that’s rigorous?

Incredible. That would be incredible even without the prior inconsistent statement.

Really. Does he think we are idiots?

Of course he does. Either that, or he’s one. RTWT

Note: When you are exposed to Obama’s extemporaneous word-smithing (see link immediately above) his dependence on teleprompters comes through loud and clear. This guy can’t string 2 sentences together without a prepared text.

Whatever your personal take on the issues mentioned above, you can’t possibly believe Barack Obama can be trusted.

In the unlikely event that readers of this blog are not aware of Michael Yon’s photo-essay about co-operation between Muslims and Christians in Baghdad, please read it here. It is one of the best good news stories to come from Iraq in some time.

A Bishop came to St John’s Church in Baghdad today, 15 November, where a crowd of locals welcomed him home. They were joined at the service by soldiers from the 2-12 infantry battalion, many of whom had fought hard to secure these neighborhood streets. Members of the hard-fighting Iraqi Army 3rd Division were also here for this special day.

That’s a very tiny part of the story. Read, and view, it all at the link above.

Michael Yon is keeping us up to date on Arrowhead Ripper, while most of the MSM waddles in – days behind. Yon does cite an NYT reporter who was there with him early on as “accurate.”

I give but brief excerpts, read all of both these dispatches.

The first day of operation Arrowhead Ripper was intense. The Army is giving full access to the battlefield, and while on base full access to the TOC (HQ) which means I see the raw truth on the ground, and as it feeds through the TOC. They are hiding nothing. Or if they are, it’s in plain view. (Special operations notwithstanding.) A reporter can see as much as he or she can stand.

…The combat in Baqubah should soon reach a peak. Al Qaeda seems to have been effectively isolated. The initial attack on 19 June achieved enough surprise that al Qaeda was caught off guard and trapped. They have been beaten back mostly into pockets and are surrounded and will be dealt with. Part of this is actually due to the capability of Strykers. We were able to “attack from the march.” In other words, a huge force drove in from places like Baghdad and quickly locked down Baqubah.

…On information flow, as of noon in Baqubah on 22 June, the press is starting to flood in. The Public Affairs Office and the press climate at this Brigade are A+. Access is actually better than I have ever seen, and that is saying a great deal. A PAO officer told me that about 20 press should be here over the next days, so we should be able to get reports from many independent sources and compare and contrast. The access is unbelievably good. They are not holding back the good, bad or the ugly. Press who aren’t here in Baqubah with 3-2 Stryker Brigade are missing out. However … the press who are here are wasting huge amounts of time on trivial matters that are occurring above the level of 3-2.

To support Michael Yon, see: How this Project is Funded then visit this Paypal link.

10,000 US troops launched a hunt for al-Qaeda militants in the province of Diyala – one of the largest offensives since the invasion in 2003.

Micheal Yon writes about this as he heads out with our troops. Reading the whole thing is Recommended.

…In the short time since Petraeus took charge here, Anbar Province – “Anbar the Impossible” – seems to have made a remarkable turnaround. I just spent about a month out there and saw no combat. I have never gone that long in Iraq without seeing combat. Clearly, some areas of Anbar remain dangerous—there is fighting in Fallujah today—but there is also something in Anbar today that hasn’t been seen in recent memory: possibilities. There are also larger realities lurking up on the Turkish borders, but the reality today is that the patient called Iraq will die and become a home for Al Qaeda if we leave now.

…Northeast of Baghdad, innocent civilians are being asked to leave Baquba. More than 1,000 AQI fighters are there, with perhaps another thousand adjuncts. Baquba alone might be as intense as Operation Phantom Fury in Fallujah in late 2004. They are ready for us. Giant bombs are buried in the roads. Snipers—real snipers—have chiseled holes in walls so that they can shoot not from roofs or windows, but from deep inside buildings, where we cannot see the flash or hear the shots. They will shoot for our faces and necks. Car bombs are already assembled. Suicide vests are prepared.

The enemy will try to herd us into their traps, and likely many of us will be killed before it ends. Already, they have been blowing up bridges, apparently to restrict our movements. Entire buildings are rigged with explosives. They have rockets, mortars, and bombs hidden in places they know we are likely to cross, or places we might seek cover. They will use human shields and force people to drive bombs at us. They will use cameras and make it look like we are ravaging the city and that they are defeating us. By the time you read this, we will be inside Baquba, and we will be killing them.