The inappropriate criteria used to select potential political cases for review did not include the term “Progressives.”

The Democrats’ attempt to make the IRS corruption appear apolitical is worse than the original crime, “We know they did it, but we don’t care.”

This Kimberly Strassel piece documents the most recent behavioral conditioning of the IRS: To regard the words “tea party” as Winston Smith regarded rats. Read it, and see why things haven’t much changed since 1170, or 1949; when Smith was the protagonist in George Orwell’s Nineteen Eighty-Four.

Nobody had to give any direct order to even barely conscious union members astute employees of the IRS (EPA, OSHA, et. al.) whose self-interest is so exquisitely aligned with that of Big Government politicians.

Read the Strassel piece, but I must note this particularly risible quote from the man heading the most opaque administration since FDR; and who employed Richard Windsor Lisa Jackson, still employs Eric Holder and just promoted Susan Rice: “The only people who don’t want to disclose the truth are people with something to hide.” -Barack Obama, 2010
(How can I fit a reference to Lois Lerner in here? Oh.)

The Democrat harping on mysterious “foreign contributers” is hard to take from a guy who accepted credit card donations from anywhere; not bothering to employ simple, and standard, ways to prevent such illegal donations.

On the NSA surveillance of every phone number ever dialed, and where and for what every credit card is used: No doubt this is a result of the Patriot Act – i.e., Big Government under George Bush. Seriously, it’s what Big Government does. George and Barack are just following the lead of Woodrow and Franklin. And Henry, of course, but we did break with That Sort of overreach circa 1776.

George Orwell labeled one manifestation of this tendency “Thought Police.” Many other things were illegal in Orwell’s Oceania, you’d be surprised by the similarities.

While what the Obama Administration has done with the NSA appears ‘legal’ to me, the president is certainly open to the charge of hypocrisy. George McGovern didn’t whine so much about Constitutional violations as did Senator Obama.

Obama’s hypocrisy, however, isn’t the point. The point is that Big Government will unfailingly use whatever powers it has to increase the power it has – whoever is in charge. None of these scandals are failures of our current system, they are the system. None of it is overreach, it’s how serfs are treated.

This is the simple point the tea party has been politely making. It’s why they were targeted.

Meanwhile, Lois Lerner, the head of the exempt organizations division of the IRS, will take the 5th in her non-testimony to Congress.

It’s curious that a high-level IRS official would have to invoke non-self-incrimination in a situation where she apologized for low-level people who were solely responsible. Since when does “bad customer service” require that?

No telling, really, when these people will decide to respect Constitutional Law. 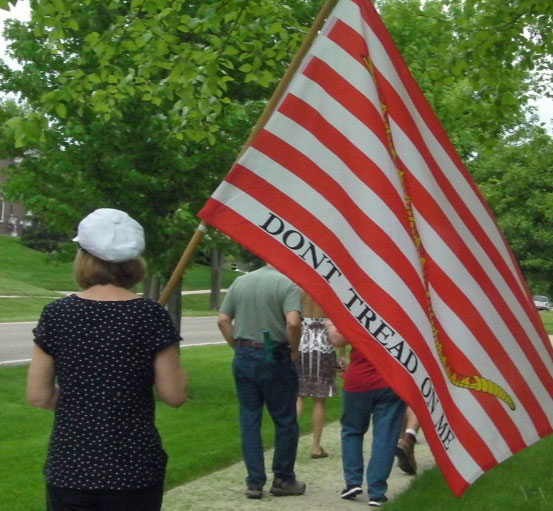 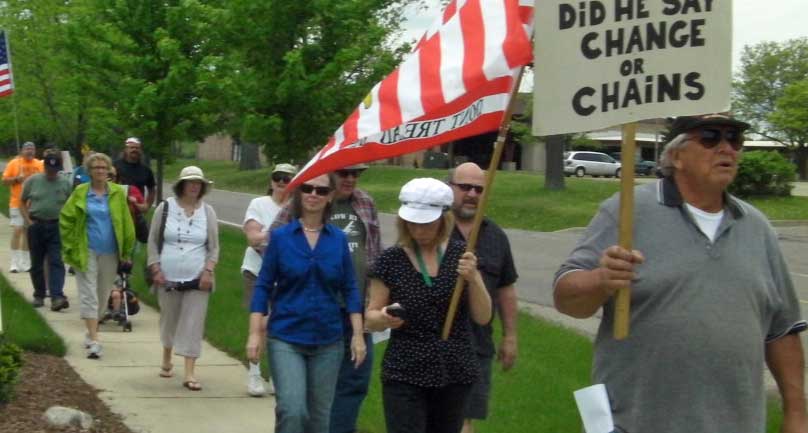 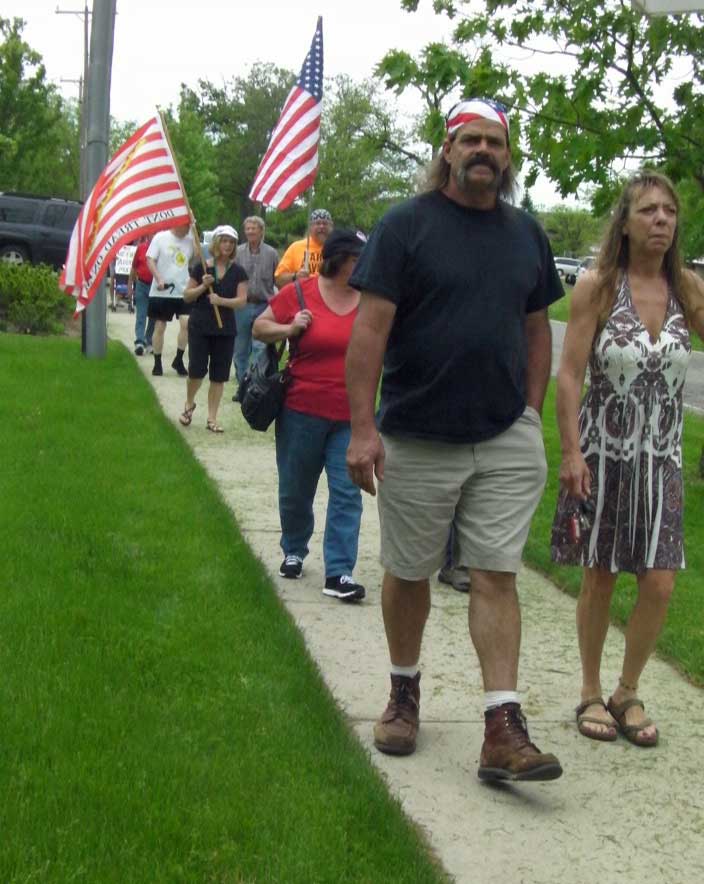 There were 25 – 30 very polite people, some couldn’t stay long so we averaged about 25 at any given time. Many drove an hour or more to attend. Most were older, but there was a 2 year old with his mother, and these young ladies. Nice to see. They’re all home-schooled, by the way. 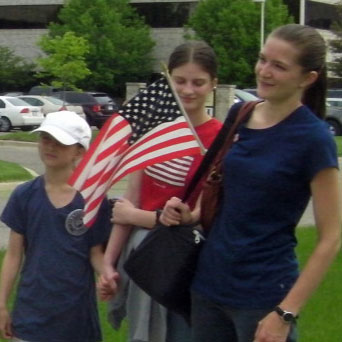 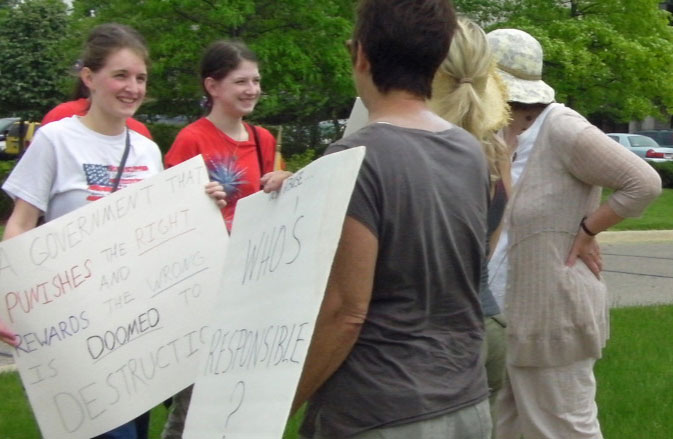 We were not allowed on the private property wherein the IRS rents its office space, so we marched up and down West Road in front of the building.

The building manager was nervous, perhaps frightened, and quickly escalated from a firm but polite eviction speech to threatening to call the police. He didn’t, but his mannerisms when he got to that point (about 30 seconds) were quite agitated. I don’t think he understands who it is that shows up for tea party protests.

It wouldn’t have taken long for the police to arrive. There were 2 squad cars the entire time (some others cruised through) and a Homeland Security vehicle. 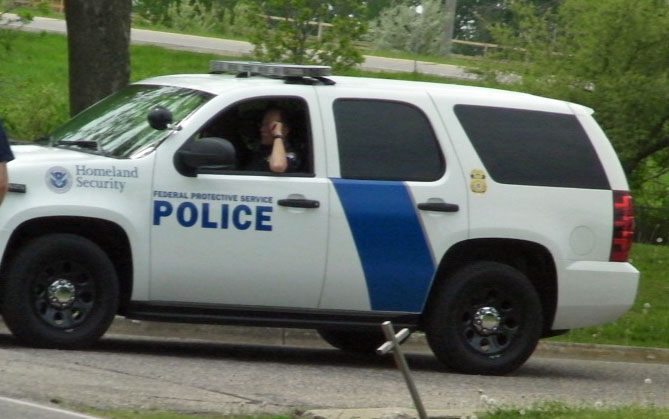 Update: Thanks to Instapundit for the link.

Maybe the confluence of interest from the ATF, FBI, IRS and OSHA are coincidental. Maybe not.

The insidious part of government out-of-control is that you’re a lot less sure it’s coincidence than you were last week.

On behalf of Tea Party, Patriot groups, 9/12, liberty activists, and the American people, we are calling for anyone and everyone to protest the IRS’ complete abuse of power on Tuesday, May 21, 2013 at noon local time.

Find an address close to you at the link above.

On November 5th, 2008, I said that the Obama Administration would be the most corrupt in living memory. I was wrong. It’s not merely living memory. And it goes beyond simple corruption.

The American people have been subject to a direct, systematic attack by the federal government, accomplished via the tax laws. Extremely complex laws were combined with bureaucratic ignorance, institutional arrogance, a monopoly on the use of force and a leadership competent solely in permanent campaign mode; in a comprehensive effort to punish dissent, interfere in elections and restrict religious freedom. Information was demanded that could only result in limiting freedom of assembly. Confidential tax information was leaked. Lies were repeatedly told to the legislative branch and to all Americans. When it became apparent that the perfidy would be exposed, and before informing Congress, the IRS staged a passive “Mistakes were made” apology by planting a question at a press conference.

[The IRS] acknowledged it was wrong for the agency to target groups based on political affiliation.

“That was absolutely incorrect, it was insensitive and it was inappropriate. That’s not how we go about selecting cases for further review,” Lerner said at a conference sponsored by the American Bar Association.

“The IRS would like to apologize for that,” she added.

OK, go ahead and apologize, you have our permission. When you do, please reference the First Amendment. And then, name names, fire people and bring charges.

Admit that it was not just groups with the words “Tea Party” in their names. Discuss why, after president “Know Nothing” and his cronies specifically named individual Americans who disagree with the president’s policies, that those named individuals were audited. Expand on your understanding of why it’s wrong for the federal government to demand the content of individual prayers, specifically threatening perjury charges for those so questioned. Tell us why “progressive” groups received preferential treatment in the same time period. I think we need more insight than “inappropriate,” or “poor customer service.”

Tell us if you believe that the root problem is allowing corporations to practice free speech, and whether more regulation is needed. Why is current legal complexity insufficient unto hiding the IRS agenda? Explain why the reasons you gave for the “enhanced scrutiny,” don’t even hold up.

Finally, do you think the IRS transgressions are irrelevant if no one can prove that Obama is directly involved? Do you agree that if the president was involved, it shows that he is the most corrupt, tyrannical leader in American history, and that every branch of the executive division in our government is suspect? If the president wasn’t involved, can any number of straw men, any amount of ad hominem political hackery, any quantity of ignorance pleading – change the fact that it is his Administration?

Before answering, think about what it means if Obama wasn’t involved: The IRS, an agency with the power to destroy every person in America, did all of this on its own initiative.

Explain, please, why your actions did not violate each and every term of the following:

Congress shall make no law respecting an establishment of religion, or prohibiting the free exercise thereof; or abridging the freedom of speech, or of the press; or the right of the people peaceably to assemble, and to petition the government for a redress of grievances.

There is a nascent protest scheduled at IRS locations on Tuesday May, 21st. At noon, I will be at:

Let us see what happens.