Florida Governor Ron DeSantis recently flew two plane loads of illegal immigrants (a bare smattering of those flown into Florida in the dead of night by Joe Biden) to Martha’s Vineyard. One of the most affluent places in the US1.

Massachusetts Senator Elizabeth Warren was not pleased. She had this to say on Twitter:

Exploiting vulnerable people for political stunts is repulsive and cruel. Massachusetts is fully capable of handling asylum seekers, and I’ll keep working with local, state, and federal partners to ensure we have the necessary resources to care for people with dignity.

Senator, Governors Desantis and Abbott are providing your constituents with what they voted for when they elected you. DeSantis handed you an opportunity to renew your compassionate commitment to ‘asylum seekers’. And you did. What’s not to like?

Your compassion and the Vineyard’s wealth can now be brought to bear directly on healing the trauma of the volunteers DeSantis accepted from the random people foisted on his state by the leader of your party.

Asylum seekers. Enticed by President Biden’s open borders invitation, exploited by the hives of scum and villainy from which they fled, by the Coyotes who smuggled them to the border, and by random perverts, thieves, and killers they met along the way. There’s nothing DeSantis could do to worsen the conditions they escaped. In fact, he’s bidding to do quite the opposite by commending them to your wealthy and compassionate hands. What I don’t get is why you haven’t been demanding these poor and downtrodden souls to be given into your care immediately upon crossing the border.

As someone with Native American heritage, like Senator Warren, will deeply appreciate – Martha’s Vineyard is properly called Noepe in the Wampanoag language of the Algonquian’s. That’s what you should say in your paleface land acknowledgement rituals.

But also Chicago, Washington DC, New York City (where non-citizens can even vote), California (where they are eligible for free health care), and…

Oh, wait. Not California. Coal to Newcastle and all that.

These Governors are performing a public service. And besides, as I always say, “If you are going to exploit vulnerable people for personal or political gain, it’s best not to fake anything.” 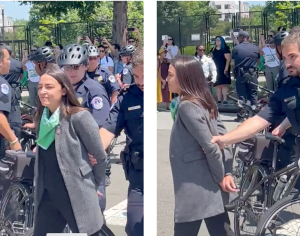 Giving sanctuary cities an opportunity to actually exercise the virtue they signal is a creative approach to satisfying a demand by someone who has an excess supply. It is charity to the vulnerable and to the pious.

Here’s a brief portrait of that piety in action from Wikipedia. I know, I know, but Wikipedia’s leftist slant makes this all the more credible to Progs not named Elizabeth Warren.
1

Since the 19th century, the island has had a sizable community of Portuguese-Americans, concentrated primarily in the three down-Island towns of Oak Bluffs, Tisbury, and Edgartown; they have traditionally worked alongside other island residents in whaling and fishing. It also has a large community of Brazilian immigrants who work mainly in the maintenance of the island’s vacation facilities.[98]

The island’s permanent residents were profiled in a London Telegraph article showing “the dark side of Martha’s Vineyard”.[99] In the same month an article titled “Edgartown’s Darker Side” appeared in the Boston Globe detailing the extremely poor working conditions suffered by Irish and Serbian students in a newly built private members club in Edgartown.[100] Concerns over munitions that may be buried on Martha’s Vineyard, most from World War II,[101] have led to an 8.1 million dollar project to remove and rebuild part of a privately owned barrier beach off the Tisbury Great Pond.[102]

The year-round working population of Martha’s Vineyard earns 30 percent less on average than other residents of the state while keeping up with a cost of living that is 60 percent higher than average.[103] Many people are moving to more affordable areas.[citation needed] Schools have seen a successive drop in enrollment over the past few years.[citation needed] Typically home to artists, musicians, and other creative types, the Island has many residents who manage by working several jobs in the summer and taking some time off in the winter.[citation needed] The lack of affordable housing on the island has forced many families to move off-island.[citation needed]

Many high-profile residents, movie stars, politicians, writers, and artists contribute to fundraisers and benefits that raise awareness of the fragile ecosystem of the Vineyard and support community organizations and services. The largest of these is the annual Possible Dreams Auction.[104]

There are, then, acceptable immigrants on Martha’s Vineyard.

Just not any who haven’t had a background employment check. Those are being exploited.

Trespass and then stalk a United States Senator into the bathroom, yelling at her because she opposes illegal immigration? That’s, “Part of the process.” says Joe Biden, surrounded by the Secret Service.

Yell at your local school board, in a public meeting, about their secret racist curricula? That’s Domestic Terrorism, requiring a Federal “task force”.

Because, as Virginia Governor Terry McAuliffe says, “I don’t think parents should be telling schools what they should teach.”

Apparently the Trump Administration has been discussing sending sanctuary seeking oppressed persons of foreign citizenship who cross our borders irregularly to those cities in the United States which have declared they will defy Federal Law in order to provide succor to such unfortunates.

My question is, why didn’t the Sanctuary Cities demand this long ago?

Instead, they are complaining such action by the Feds would be “spreading pestilence,” and “Using human beings — including little children — as pawns in their warped game to perpetuate fear and demonize immigrants…”

Wouldn’t it be most humane to send “The wretched refuse,” (quoting Emma Lazarus, as Democrats have lately done) to the place they would receive the warmest welcome?

Before a September 9th, 2009 joint session of Congress, President Obama declared, “Now, there are also those who claim that our [Obamacare] reform efforts would insure illegal immigrants. This, too, is false,” Obama said. “The reforms I am proposing would not apply to those who are here illegally.”

In response, Republican U.S. Rep. Joe Wilson of South Carolina shouted “You lie!” at the president. Joe Wilson was right, so today is “Joe Wilson Day” at TOC:

Since that article is paywalled, I’ll direct those of you without a WSJ subscription to Forbes’ account of it:
Because Of Obamacare, Illegal Immigrants Get Taxpayer-Financed Care

[N]o honest person can deny that because of Obamacare, more taxpayer resources at the state and local level are being spent on health care of illegal immigrants than would have been spent otherwise…

And they’re moving to formalize it:
California Moves Toward Extending Obamacare to Illegal Immigrants

From Reason Magazine:
The ‘Isolationist’ Smear Against Ted Cruz

I didn’t realize Jennifer Rubin, one of the WaPo‘s pet conservatives, had trashed Senator Ted Cruz as a throwback isolationist from the 1930’s. But then I seldom read the WaPo.

After the latest Republican presidential debate, the Washington Post’s Jennifer Rubin argued that Sen. Ted Cruz had undone himself “courting” the “Trumpkin base,” sinking “further into the far-right brew of isolationism and xenophobia.”

Characterizing Cruz as a far-right xenophobe, though, certainly destroys Senator Marco Rubio’s case that Cruz secretly, in his heart of hearts, favors a path to citizenship for illegal aliens. Then again, Rubin may have misremembered how much she did like the Rubio/Schumer Gang of 8 plan, “…the proposal is greatly encouraging on two fronts.”

Count me as un-encouraged then, as was Senator Cruz. And count me even less encouraged now. I’m neither xenophilic nor oikophobic. Senator Rubio’s defenders seem to have a touch of each.

This is unfortunate, since I would happily vote for Rubio in the general election, but I think he’s picked a fight that emphasizes his greatest weakness while attempting to damage the candidate most likely to prevent a Trump nomination. Trump is the primary beneficiary of Rubio’s attack.

Then, Marco Rubio attacked Ted Cruz on Cruz’ (and Rand Paul’s) resistance to NSA’s warrantless accumulation of email and phone records from American citizens, going so far as to link Cruz to Edward Snowden and the atrocity at Bataclan.

That settles the Cruz/Rubio question for me. Rubio is suspect on illegal immigration and squishy on the 4th Amendment. And, trying to tie Snowden and the Paris atrocities to Cruz is despicable.

The border with Mexico is 1,900 miles long. About 650 miles of it are fenced against illegal immigrants. Our President calls the fence “basically complete.”

It follows, then, that our President defines “basically complete” as 34% complete. Or perhaps less. I’m sure 32% would qualify. Maybe even 25%.

Perhaps our President meant “complete” in the sense of “over, done with, terminated, stick a tenedor in it.” Or maybe it’s just affirmative action for fencing material.