Since 1844, Hillsdale College has provided classical liberal higher education regardless of students’ race, religion, or sex, and was the second college in the United States to grant 4 year degrees to women.

Hillsdale’s opposition to slavery was one of its founding principles. Frederick Douglass was twice a speaker at the college.

The tradition of top quality speakers has continued. You may wish to check out Imprimis, a free monthly digest of Hillsdale College speakers. Scroll through the Contributors selection box and you will see, for example, Aleksandr Solzhenitsyn, Margaret Thatcher, Edward Teller, F. A. Hayek, Victor Davis Hanson, and many, many other great thinkers.

Hillsdale withdrew from all federal assistance in 1984 to avoid the burgeoning interference of Washington bureaucrats which threatened to destroy its mission, and has so severely damaged other institutions and their students.

Hillsdale offers 26 free online courses in topics including Literature, Philosophy, History, Economics, and Politics – including several on our Constitution. One example:
The Great American Story: A Land of Hope

This course explores the history of America as a land of hope founded on high principles. In presenting the great triumphs and achievements of our nation’s past, as well as the shortcomings and failures, it offers a broad and unbiased study of the kind essential to the cultivation of intelligent patriotism.

This preamble cannot convey the value of Hillsdale to our state and our country, but I hope it will encourage you to read this letter published in The Hillsdale Collegian:

On the College and Silence: A letter from Hillsdale College

This letter is highly, highly recommended. It is inspiring and principled. It begins:

Amidst the events of recent weeks, a number of alumni and others have taken up formal and public means to insist that Hillsdale College issue statements concerning these events. The College is charged with negligence — or worse.

This is one of the very few times I have used my ‘academia’ category on a positive post.

I attended Victor Davis Hanson‘s lecture at Hillsdale College yesterday evening. The topic: “How a Border War in Europe Led to World War II”. Excellent. Dr. Hanson has an amazing command of history.

The good news is, you can watch it here. Well worth it.

You can also visit Dr. Hanson’s blog with that link, or by using the left hand menu on TOC.

I can think of no better tribute than the email I received today from Hillsdale College.

Lady Thatcher, born Margaret Roberts in 1925, was one of the most important and beneficial statesmen of the twentieth century. When she came to power in 1979, her nation was held in the grip of unions that had command of the largest political party in the state. They used that power to shut down industries and even sections of the country at will to make employment demands. Rather than resist, the government would collude in crippling strikes. Margaret Thatcher was elected with a promise to stop these practices, and in a series of dramatic confrontations in her first year she was successful. She did not seek, she said, to adjust the power from labor to capital, but rather to return the government to serving the whole people and the public interest.

In 1982, she sent British forces to war against the junta in Argentina, which had invaded the Falkland Islands, a British protectorate. Britain won that war with the help of the United States and its president, her friend, Ronald Reagan. The Falklands are in dispute between Britain and Argentina today, and the current administration in Washington is less friendly to Britain. The people of the Falklands, whenever they are asked, still indicate in overwhelming numbers that they wish to remain as they are.

The only statue of Lady Thatcher in North America stands on the Hillsdale College campus. She visited the campus in 1994 and spoke at college events on several occasions. We are proud to have known her. At our spring convocation on Thursday we will say prayers of thanksgiving for her life and service.

Here is the text of a speech Mrs. Thatcher gave at Hilsdale, and from which this post takes its title. 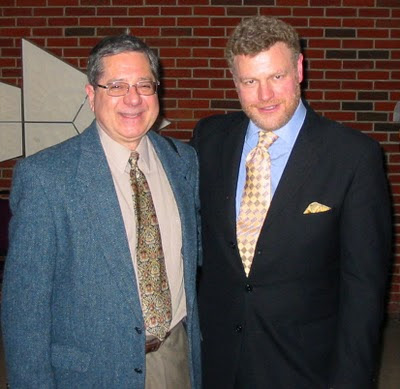 Mark Steyn spoke at Hillsdale College last night and I was lucky enough to be there.

Hillsdale was the first American college to prohibit in its charter all discrimination based on race, religion, or sex, but is probably most well known for its refusal of government funding. Steyn is a regular speaker at Hillsdale.

Steyn’s “text” as Mark Twain would say, arose from the poem Locksley Hall, by Alfred, Lord Tennyson. Tennyson wrote the poem when he was 26, in 1835. In it, he describes a utopian vision.

For I dipt into the future, far as human eye could see,
Saw the Vision of the world, and all the wonder that would be;

Saw the heavens fill with commerce, argosies of magic sails,
Pilots of the purple twilight dropping down with costly bales;

Heard the heavens fill with shouting, and there rain’d a ghastly dew
From the nations’ airy navies grappling in the central blue;

Far along the world-wide whisper of the south-wind rushing warm,
With the standards of the peoples plunging thro’ the thunder-storm;

Till the war-drum throbb’d no longer, and the battle-flags were furl’d
In the Parliament of man, the Federation of the world.

There the common sense of most shall hold a fretful realm in awe,
And the kindly earth shall slumber, lapped in universal law.

Last night, Steyn spoke eloquently and humorously about the threat of such a “world federation of universal law based on the common sense of most.” Warning that pursuing Tennyson’s vision is the road to totalitarianism, he gave examples of the IAEA, the IPCC, the UN; and, paradoxically, Western democratic governments: “Watching China, India and Russia save the world from the economic disaster western nations intended to foist upon themselves at the recent Copenhagen conference, one can only be grateful.” (I paraphrase.)

Another example, Steyn says, is that it is no surprise that after 2 generations of Americans have marinated in educational institutions designed to emphasize cultural relativism that the Army Chief of Staff could say, “It would be a shame — as great a tragedy as this was — it would be a shame if our diversity became a casualty as well,” after 14 Americans died in the Fort Hood massacre: “When the Chief of Staff of your Army sounds like a San Francisco school superintendent, you’re in trouble.”

Steyn’s remarks will appear in Imprimis. Look for it.

In writing this I looked for a site to allow copy and paste of that portion of Tennyson’s poem Steyn quoted yesterday. As a result, I became aware that Tennyson revisited Locksley Hall in 1886 with the poem Locksley Hall Sixty Years After (1886).

There is a pessimism and disappointment evident in this poem; and what amounts to an extended rebuke to the young, perhaps even to the young Tennyson. The utopian longing remains, but it seems that lack of progress toward this goal has taken a toll on the older Tennyson.

Chaos, Cosmos! Cosmos, Chaos! once again the sickening game;
Freedom, free to slay herself, and dying while they shout her
name.
…

Bring the old dark ages back without the faith, without the hope,
Break the State, the Church, the Throne, and roll their ruins down
the slope.

Given the dire consequences we experience today from the politically correct poppycock Tennyson foreshadowed in 1835, perhaps it is fair to read these excerpts as second thoughts.

I would be remiss here if I did not thank Mike for a tour of the campus. Impressive. Especially the Mossey Library Heritage Room.

P.S. I sometimes think of Mark Steyn as a fusion of H. L. Mencken and P. J. O’Rourke. If you don’t already know his stuff, you should really check it out.

Update 13-March 11:50AM: Welcome to visitors from SteynOnline. And here is a podcast of Mark talking to Elliot Gaiser at Hillsdale.

The terms Instalanche and Slashdotted come to mind. If there is such a term for SteynOnline I don’t know it. Steynstampede?