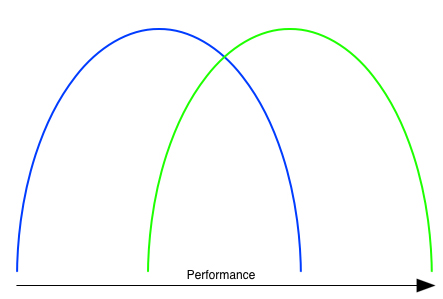 My first exposure to Demure Thoughts came today, thanks to Day by Day.

It’s worth the visit just for this,

…the practice of trying to separate a man from his actions is what has gotten this country into the s**t hole it is [in] today.

…A man is defined by his actions or lack there of. [sic] There is no separating the act from the person who commits it. That is like saying the act is a living breathing thinking entity that has the ability to stand on its own. It is f**king stupid. It is also the foundation of everything liberal in this f**king country.

…but RTWT, it starts with a comment or two on Bill Clinton: TDFU: Sunday Stupidity

The idea of “hate the sin, not the sinner” had value when most people could still feel shame. We don’t generally have that ability anymore. Without that, the act is easily separated from the actor. Intrinsic values become external, disconnected, free of moral weight. Whether you should feel shame comes down to what the meaning of “is” is.

If you think what you do has nothing to do with who you are, you are probably a result of government school self-esteem training. Teaching the act as the focus is teaching getting away with it as the justification.

The reviews are in.

Who cares what presidents think?

Meanwhile we have some revisionism going on:

[If they don’t get to hear the President t]hey will also miss a perfect opportunity to discuss why nut-job conservatives got into such a tizzy over President Obama’s back-to-school speech Tuesday to students across the country about the importance of assuming responsibility for their education.

Why did people who thought it was fine for the first President George Bush to address millions of schoolkids decide it was an outrage for Obama to do the same?

Somebody needs to take a way-back pill and stop hyperventilating since they can’t remember the Congressional hearings a Bush I speech to students provoked. People who thought Bush I’s speech was OK didn’t have Obama’s multi-trillion dollar favors to corporatists, fringe environmentalists and unions to worry about.

Imagine the outrage if Bush II had attempted such a speech and handed out a lesson plan in advance asking teachers to have students “write letters to themselves about what they can do to help the president. These would be collected and redistributed at an appropriate later date by the teacher to make students accountable to their goals.”

Here’s what happened to Bush I, even absent the visceral hatred applied to his son:

But be at peace, tomorrow is “adult swim” when we get to hear why we all must support Obama’s health care “reform.” Just remember, your kid got through it. So will you, because the only reason Obama’s giving the health care speech is because you went to a Tea Party or a Town Hall, called or wrote your Congresscritter, or told your neighbors and friends what a stupid idea the health care bills are.

You forced him to talk to you. Let’s see if he actually says something this time

Arne Duncan, Department of Education Secretary, has published indoctrination guidelines for government school students in conjunction with President Barack Obama’s upcoming nationwide speech. The speech will be piped into the school rooms of this captive audience around noon on September 8th.

After the speech, teachers are to ask the pre-K through 6th grade indoctrinees (my suggested answers interspersed):

What do you think the President wants us to do?

He wants us to Shut Up. It’s the only specific thing he’s ever proposed.

Does the speech make you want to do anything?

Attend a protest to advocate competition with government schools.

Are we able to do what President Obama is asking of us?

Not with a clear conscience.

Enough, can’t I just be waterboarded instead?

If you think educating our children is a solemn reponsibility, you are in direct disagreement with the Michigan Education Association. Click over to MEA Exposed in order to hear some truly despicable speeches from Paul Helder, president of the Grand Rapids teachers union, and Earl Graeber, an MEA director working with the Grand Rapids union at the MEA Bargaining, Political Action and PR Conference, earlier this month in Detroit.

Truly, the MEA cares about the children only as bargaining chips.