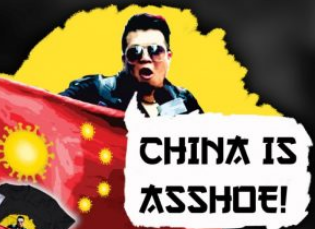 Or so the recent Hong Kong protests have indicated.

So, being assholes, the Chinese Communist Party is now running full court dezinformatsiya on the CCP virus origin. 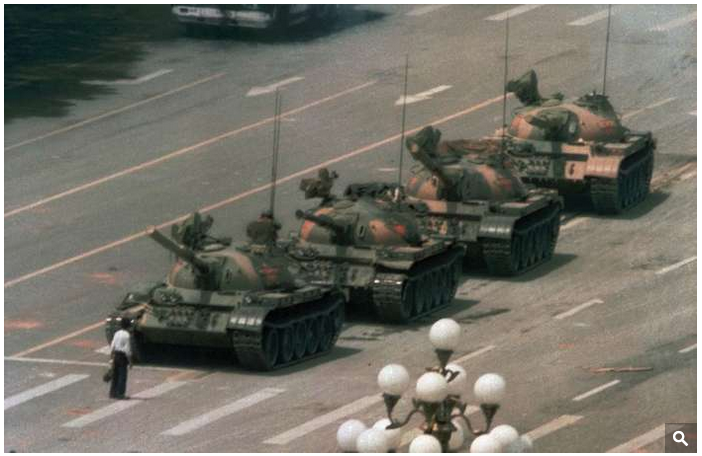 Actually, there were very likely more than 10,000 deaths at Tiananmen.

China is being defended in the West by people who hate the implications of individualism, capitalism and freedom of conscience.  That is, the Democratic Party, the American TDS press, the Chinese Press in America, and all those whose affinity lies with the CCP rather than the Chinese people.

Propaganda
Reporter Who Tap-Danced Around Trump’s Question If She’s Working For Communist China: SHE DOES! – The Lid
Chinese-Language Media Landscape – Hoover Institution

FACT CHECK: Trump Asked a Reporter If She Was Working For China… She Is – National Pulse

Chinese aid
Making a few bucks on shoddy goods in a pandemic, or selling charitable donations back to their benefactors. In a pandemic they lied about and failed to contain.

I have tried to keep pace with this in order to produce a comprehenisve list.

I give up, the revelations of CCP perfidy roll in too fast.

Loss of advertising revenue has compelled the MSM to up the ante on monetization of their opinions; which used to pass for “news.”

Without the drive to capture internet eyeballs the whole phenomenon of “click bait” wouldn’t exist, and fake news would be less pervasive and less hysterical.

Fake news wouldn’t disappear, we had plenty of it before AlGore invented the internet. I noted a few of the modern practitioners here, mentioning Walter Cronkite, Jayson Blair, Stephen Glass, Dan Rather and Walter Duranty.

If the internet has accomplished nothing else, it has truncated the loop in which “journalists” get fired or resign for blatant lying. Of those mentioned above, it took quite a long time for them to be expelled from the fellowship.

Some never were. The NYT hasn’t given back Duranty’s 1932 Pulitzer. Dan Rather is still out there claiming he was right about Dubya’s service in the National Guard. Water Cronkite still invokes reverence among the naive.

OTOH, CNN’s Eric Lichtblau, Thomas Frank, and Lex Haris were fired or resigned within hours of their lies.

Thanks to Donald Trump for his assistance in provoking the MSM liars to self-identify. And thanks to AlGore for his invention, though that’s yet another fake news meme.

I’d also credit Google, since they’re the primary entity eating the MSM advertising revenue, but Google’s bias is even more pervasive and harmful than the MSM’s.

On Friday the President said,

I am still pushing for us to achieve a big deal [on the debt ceiling].”

The Truth About the Debt Ceiling
Raising the Debt Limit: It Just Makes Sense. Not.
Regime Change May Be Needed To Cut Deficit

The United States spends 44% more each month than it receives in tax revenue. Failure to raise the debt limit therefore means an immediate 44% cut in expenditures. Then we must make choices about what spending has to be cut.

The Weekly Standard provides an example of the choices that could be made:

[It is projected that] there will be $172 billion in federal revenues in August and $307 billion in authorized expenditures. That means there’s enough money to pay for, say, interest on the debt ($29 billion), Social Security ($49.2 billion), Medicare and Medicaid ($50 billion), active duty troop pay ($2.9 billion), veterans affairs programs ($2.9 billion).

That leaves you with about $39 billion to fund (or not fund) the following:

Other spending, such as Departments of Justice, Labor,
Commerce, EPA, HHS ($73.6 billion)

You can get all the cuts you need right there in the last 3 items. DoE, EPA, and HUD can simply be disbanded and their assets sold. HHS can be cut in half.

However, the President announced today he is unsure he wants to pay Social Security recipients if the Republicans don’t tack a trillion dollar tax increase on top of Obamacare. He said he might choose to take away the dog food Republicans have been force feeding to Grandma:

I cannot guarantee that those [Social Security] checks go out on August 3rd if we haven’t resolved this issue, because there may simply not be the money in the coffers to do it.

Mr. President, be serious. At the end of 2010 the Social Security Trust Fund had a surplus of 2.6 trillion dollars. So, even if we decided not to pay Social Security out of the general fund, as was demonstrated above that we could, you could just cash in some government bonds. What?! Social Security payouts are just another form of interest on our debt?

Well, then, I guess you are right, we’d better pay the foreign creditors first.

PS, It’s true we couldn’t immediately defund DoE, EPA, HUD and HHS. in exchange for their demise we should raise the debt limit enough to give give all the employees a severance package and cover an orderly winding down of their operations before the 2012 elections. Disbanding BATFE will pay the interest on that.

Maybe because they, umm… aren’t smart?

Michael Barone on what’s gone wrong for the smartest President ever.

The same people who directed the campaign that defeated Hillary Clinton and routed John McCain, a campaign that raised far more money and attracted far more volunteers than any before it, have within a year come up with a legislative program that is crashing in ruins and that, to judge from recent polls, has left the Democratic party weaker than I have seen it in almost 50 years of closely following politics.

People have been telling me Obama is smart because of the way he ran his campaign, but no one can now contend that Obama provided leadership or management to that campaign. They would have to explain how and to where those qualities have vanished.

If the campaign appeared to be “smart,” it appeared so because the candidate was clueless. If Obama is smart, then a clueless ideological committment is the only benign explanation for his persistent advocacy of horrible policies. If he is not clueless, he is a liar. Of course, he could be both.

During the campaign many people told me Obama’s inexperience would be OK, because he would surround himself with smart, experienced people. If the people around him are smart and experienced, we must wonder about the utility of those characteristics to governance.

From The Belmont Club, The Miracle of the Loaves and Fishes.

Robert Reich has been widely quoted in the news and blogs lately, citing a 2007 speech he delivered at UC Berkeley in which he is supposed to have said of health care reform that:

That is largely going to be interpreted as the “hidden truth” that the MSM doesn’t want you to know and to a certain extent it is, but not in the way the casual reader may understand it. Robert Reich was once my teacher and I knew there had to be more to it than that, and so I went to the source: …

RTWT You’ll need to to appreciate the following.

Put it this way, Barack Obama told us the truth over and over again and it was much clearer and starker than a thousand page cap-and-tax bill; “So if somebody wants to build a coal-powered plant, they can; it’s just that it will bankrupt them because they’re going to be charged a huge sum for all that greenhouse gas that’s being emitted.” Other truths he told us: “The Supreme Court, tragically, never spoke on redistribution.” or, “Judge me by the people who surround me.” or, “What I really favor is a single-payer health care system.”

Even now, when he says, “If you want to keep your health care plan, you can,” it’s true. The unspoken implication that makes that so is, “It’s just that it will bankrupt you or your employer.”

Our President said many things last night that were true within the narrow confines of his intentions and imagination. The speech conformed to the Clinton meaning-of-“is” principle: That is how he said things. Most of what he said, however, was logically and practically false and he cannot not know that. President Obama was not honest.

One of many things he said that I found strange was that ninety percent of all insureds in Alabama buy their health coverage from a single company. That’s not necessarily strange by itself, but the President used it to bolster his repeated claim that only government intervention can provide necessary competition among health insurers. Unfortunately for the President’s intended point, the reason for this particular monopoly is the government of Alabama. Alabama regulations prevent other insurance companies from competing in Alabama. That is, there’s no free market.

If, as he claims, President Obama truly desires increased competition, and if, as he says, he supports a free market, then he would advocate breaking down such obvious government barriers to competition before seeking to reinvent the entire health care system on 60 days notice. This reform would be free to taxpayers, certainly reduces health insurance costs in Alabama, and can easily be reversed. Why not try it?

If the President believed his own rhetoric what he certainly would not do is blame private industry for the effects of government regulation. Though I’m sure that insurance company in Alabama lobbies hard to keep its market share at 90%, they can’t be blamed for protectionism practiced by Alabama legislators.

Powerline also noticed how many of the President’s comments were misleading and needlessly partisan. A particularly egregious example:

[Obama] There are also those who claim that our reform effort will insure illegal immigrants. This, too, is false – the reforms I’m proposing would not apply to those who are here illegally.

[Powerline] This is an outright lie, as Congressman Joe Wilson couldn’t resist blurting out during Obama’s speech. The Democrats defeated Republican-sponsored amendments that would have attempted, at least, to prevent illegals from being treated under the House version of Obama’s plan. I think everyone expects that if Obamacare becomes law, illegals will receive benefits on an equal basis with citizens.

Over at Reason magazine they also noticed some reality discrepancies: Obama’s Lies Matter, Too

Again last night, Obama invoked the boogeyman of “special interests” who “lie” in order “to keep things exactly the way they are,” despite the fact that the special interests in this case are lining up to support the president, and that the critics of his plan tend to bemoan, not defend, the status quo. Opponents of his plan, he said, were “ideological”; Ted Kennedy’s support for health care reform, meanwhile, “was born not of some rigid ideology, but of his own experience.” Obama said his door was “always open” to those bringing “a serious set of proposals,” and he slammed that door shut on any attempts to break the almost universally unloved link between employment and insurance. He yearned to “replace acrimony with civility,” then got Democrats stomping on their feet with attacks against the Iraq War and “tax breaks for the wealthy.” The center of the debate, as always, was wherever he chose to stand.

The President needed to gain trust. He needed to invoke hope and engender change. He failed.