From New York to California parents fear to criticize the Marxist indoctrination of their children.
The Miseducation of America’s Elites

In Los Angeles, teachers union leaders think their membership is so arrogant and stupid that teachers must be warned not to publicly flout their disdain for the CCP virus restrictions they use to avoid doing their jobs.
LA Teacher Warns Union Members Not To Post Vacation Pics While Classrooms Are Still Closed

In Virginia, a Wokerati K-12 unionist cabal conspires on Facebook to suppress the First Amendment rights of anyone questioning Critical Theory. Doxxing and hacking are encouraged. Sort of a cybernetic struggle session.
Loudoun County Anti-Racist Teachers Are Making Their Lists

And to prove the LA union leadership had a point, we turn to Chicago, where a teachers union grandee vacationed in a tropical, CDC designated CCP virus hotspot, and did exactly what they warned about.
Puerto Rico Swimsuit Selfie Is A Lesson On Chicago Teachers Union

Still in Chicago…
Chicago Teachers Union Prez Tells Members: Don’t Reveal You Got Vaccine If It Means You Return To School

There’s talk about breaking up Facebook, but Facebook is only a symptom. We need to break up public employee unions. Especially those of teachers.

Dan Hannan: Falling IQ scores may explain why politics has turned so nasty

If You Send Your Kid to Private School, You Are a Bad Person

I am not an education policy wonk: I’m just judgmental. But it seems to me that if every single parent sent every single child to public school, public schools would improve. This would not happen immediately. It could take generations. Your children and grandchildren might get mediocre educations in the meantime, but it will be worth it, for the eventual common good.

When Allison Benedikt says “worth it,” she is insisting that you consider all other children more important than your own child. Those of a totalitarian disposition might consider this idea worthy of debate, but, short of government forcing it, no one could consider it practical. Even president Obama has rejected Benedikt’s dictum.

One wonders how Progressives like Ms Benedikt reconcile their relentless public school focus on self-esteem training with their opinion that the collective is more important than you are. You’re special because your parents decided to sacrifice your education to the common good? You’re just as important as everyone else who can’t read or write?

It reminds me of an old Russian joke about a peasant with one cow who hates his neighbor because the neighbor has two cows. A genie offers to grant the envious farmer a single wish. “Kill one of my neighbor’s cows!” he demands.

For Ms Benedikt that’s not a bug. It’s a feature. Of course, she would probably object that that’s an example what she wants to change. However, she also probably would object to education system reforms like those in Wisconsin and Michigan.

And, by the way, somebody should tell Ms Benedikt that calling president Obama a “bad person” is racist.

That’s what I said Monday.

Today, Investors Business Daily asks, “Why Are Tuitions So High?”

An IBD analysis of data from the National Center for Education Statistics shows that from 1989-2009 the number of administrative personnel at four- and two-year institutions grew 84%, from about 543,000 to over 1 million.

RTWT You’ll soon see that it is the confluence of Federal interference in K-12, Federal regulation of higher education, Federal student loans and Pell grants, and teacher’s unions political clout which are responsible for the perfect storm of rising costs. 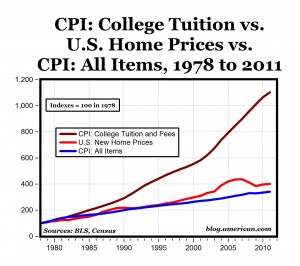