Cynthia herself, of course, has the inside track, but,

Clarence Paige:
President has soft-pedaled his own achievements,
(I wonder what it would be like if the President had an ounce of chutzpah?)

…must not be counted out.

Taking a British idiom, these handsome statuettes of a Unicorn and its editor are known colloquially as the “Starkers” awards. 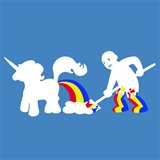 Note: the links are not recommended, but are included as evidence for members of the Starkers Awards Jury.

As long as we have Cynthia Tucker, we will not be without a measure of how low the editorialist bar can be set.  Obama tried too hard to work with Republicans

Go ahead, read the whole column. It is so deranged it won’t even make you angry. Bemused, more likely.

In that same spirit, we have someone named Lance Dickie cautioning voters not to vote against their own interests. Mr. Dickie purports to address the 60 to 70% of Americans who specifically oppose the President’s policies on health care, immigration, energy taxation, bail-outs and, particularly, financial “reform.”

Voters seeking revenge this election for the collapse of the economy, and their frustrations with a loud, crude campaign season, must not let anger overtake their own self-interest.

Of course, there is a question being begged here. Does the general government best serve your interest by promoting your dependency upon it, or does it do so by securing the blessings of liberty on your behalf? Less abstractly and more broadly: Are you willing to make your grandchildren into wage slaves for your own present comfort?

Mr. Dickie has nearly, if unintentionally, written a brilliant satire. For example:

I think the plan is to make Bernie Madoff the speaker of the House.

This would be funny if it weren’t for the fact that Madoff would actually be an improvement. He was self-aware enough to know he was running a scam. The present Speaker is not so wise. She says unemployment benefits “create jobs faster than almost any other initiative you can name … it injects demand into the economy.”

Who would you rather have as Speaker: Someone who apprehends reality or someone who does not? It’s a given that they are both crooks, but you can at least reason with one of them.

Not only ought there to be clowns, there ARE clowns. Just not the ones this guy thinks there are.

Send in the Clowns! There Ought to be Clowns!

Bieda Says Recallers Are ‘Clowns’
Rep. Steve BIEDA (D-Warren), one of six lawmakers who is facing an active recall threat said today that he doesn’t think much of the folks involved in that effort…

…Bieda is facing a possible recall because he supported tax increases last year to balance the budget and he said, “I have no qualms about decisions I’ve made” even though “I may disagree with myself” on some of those issues…

But, read the whole thing. He has other equally weird comments.