China just bought the battery manufacturing darling of the US DoE and the Granholm adminstration.

A company that two years ago was one of the most promising U.S. innovators in the clean-fuel auto industry was rescued from collapse Wednesday. Its buyer: A Chinese auto-parts company.

Wanxiang Group Corp., one of China’s biggest parts makers, offered a $450 million lifeline to A123 Systems Inc., a maker of advanced batteries for electric vehicles that received U.S.-government backing. The deal would put the firm’s lithium-ion technology and its U.S.-funded manufacturing plant into the hands of a company that has slowly acquired a passel of auto assets across the Midwest.

A123 has ripped off the American taxpayer for $249 million in grants from the U.S. Department of Energy. It was one of former governor Granholm’s favorite picks, to the tune of $100 million. The Chinese are grateful, I suppose, for taxpayer assistance while A123’s stock dropped from $26.00 to $0.82. Without said assistance, A123 might have been gone before they could buy it. Worse yet, from Obama’s point of view, Bain Capital might have turned it around.

TOC has mentioned A123 as an excellent example of government “investment” failure.

So. Is anyone wondering why the Chinese didn’t buy Solyndra? My guess is that they, unlike the Obama administration, sometimes know a hopeless investment when they see one. And the fact that Obama himself deigned to appear at, and specifically cite Solyndra, while leaving A123 to the likes of Debbie Stabenow, does tell you that the more money government uses to tilt the market the higher the political profile, and the worse the results. A123’s jobs may be going to China now, but at least there are still jobs.

The US Olympic Team is outfitted in uniforms made in China. This has some people upset. Senate Majority Leader Harry Reid, D-Nev., for example:

I think they should take all the uniforms, put them in a big pile and burn them and start all over again.

My first thought was to put all the Senators and Congressman in a big pile. But I couldn’t figure out if Barney Frank would be on the top or on the bottom, and I quickly stopped thinking about it.

But what’s the problem? The president and Congress gave a loan guarantee of $529 million to a foreign competitor of US automobile manufacturers. The president and Congress spent at least a billion and a half taxpayer dollars to create jobs overseas, sending a lot of it to places who don’t do much for us at all. The Chinese, at least, have lent about a trillion dollars to the US. And whose fault is that?

In any case, the US Olympic Committee is privately funded, so it isn’t even taxpayer dollars Harry wants to burn. It’s private funds, like the more than $40,000 Ralph Lauren has donated to Democrats since 2008.

What’s Ralph Lauren got to do with it? He is the guy who outsourced the uniform production. Harry should raise his objections with Ralph about this, give back the money, and then get in the pile. 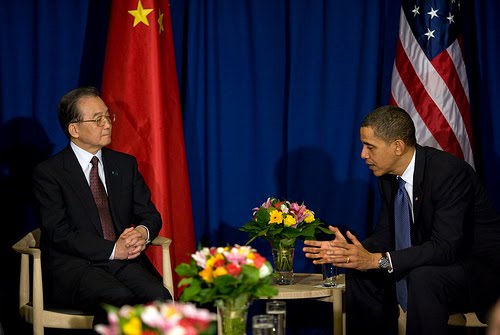 This photo of President Obama speaking with Chinese Premier Wen Jiabao at the Climate Change conference in Copenhagen is interesting for the body language and for the fact that this is how the White House wishes to portray Obama’s latest effort in “smart” diplomacy.

What’s the caption?
“Jeez, Dad, I know I’m overdrawn on my allowance already, but I really need the money.”
“The time for talk is over. My teleprompter just crashed.”
“I’m this close to socializing medicine and a de facto one child policy. Can’t you help me out?”

The photo is even more interesting in the context of this article from Die Welt.

I hope Obama makes a third trip to Copenhagen soon.

I quote from his Op-Ed in the NYT yesterday:

Watching both the health care and climate/energy debates in Congress, it is hard not to draw the following conclusion: There is only one thing worse than one-party autocracy, and that is one-party democracy, which is what we have in America today. [Well, we tried to warn you, but you won’t listen.]

One-party autocracy certainly has its drawbacks. But when it is led by a reasonably enlightened [The infanticide programs, Tibet, internet censorship, incarceration for political opinion and coddling of North Korea aside.] group of people, as China is today, [If China is led by such paragons, what’s Obama and his crowd, then, unenlightened? Is that possible for a Harvard graduate?] it can also have great advantages. That one party can just impose the politically difficult [as may Democrats, if they absorb the courage of their lobbyists] but critically important policies needed to move a society forward in the 21st century. It is not an accident that China is committed to overtaking us in electric cars, solar power, energy efficiency, batteries, nuclear power and wind power. [It is also not an accident that all those examples involve electricity, that China is building a coal fired power plant every 2 weeks or that we’re not building any nuclear plants at all.] China’s leaders understand that in a world of exploding populations and rising emerging-market middle classes, demand for clean power and energy efficiency is going to soar. Beijing wants to make sure that it owns that industry [So why, again, did we finance nationalizing our auto industry and defunct banks by selling T-bills to China?] and is ordering the policies to do that, including boosting gasoline prices, from the top down. [Good, let them lower their demand.]

Our one-party democracy is worse. [I did not make that last sentence up.] The fact is, on both the energy/climate legislation and health care legislation, only the Democrats are really playing. With a few notable exceptions, the Republican Party is standing, arms folded and saying “no.” [Thank you.] Many of them just want President Obama to fail. [Another way to say this is that we don’t want him to succeed in the way of a Chinese totalitarian oligarchy.] Such a waste. Mr. Obama is not a socialist; he’s a centrist. [The President would be a centrist in China, it’s true.] But if he’s forced to depend entirely on his own party to pass legislation, he will be whipsawed by its different factions. [Obama’s own party is not even as cohesive as China’s totalitariat, and America is poorer for it, go figure.]

Not since Walter Duranty fawned over Josef Stalin, ignoring the show trails and denying the Soviet government created famine in the Ukraine where 20 million were deliberately starved to death, have we seen such disingenuous praise of totalitarianism on the pages of the Gray Lady. Aside from Hugo Chavez, of course, but he’s a piker.