GM The UAW should not have been bailed out. Thanks to ZeroHedge: GM Stock Slides To Fresh Post-Bankruptcy Lows 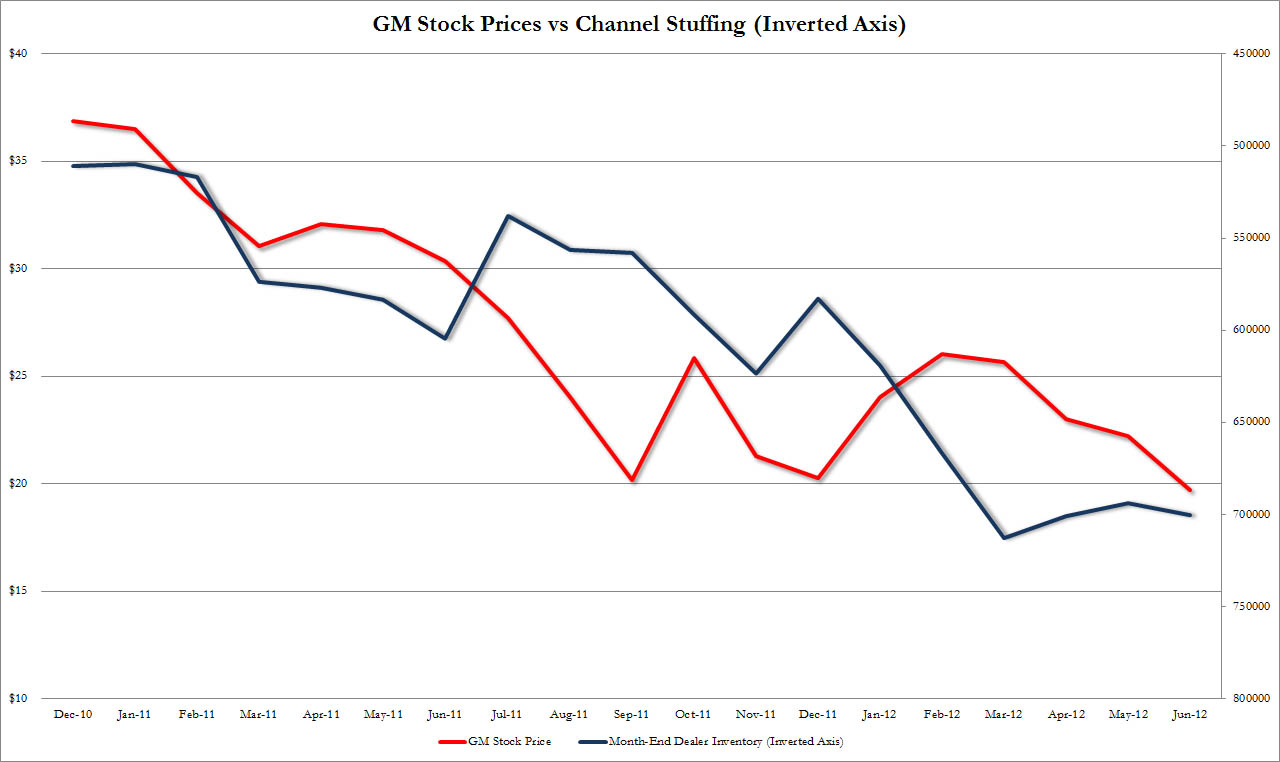 Ford pulls its ad on bailouts

This is what happens when government seizes corporations. If it will decide to give money to a corporation going bankrupt, to negate legal contracts… to suspend the rule of law, then government owns the result. In the case of GM, literally and morally.

Criticism of such a deal is automatically politicized, and while political speech may be protected under the First Amendment; what is that to the Corporatist Axis? The Axis will suppress free speech in order to protect its political agenda reciprocal “investment.”

Ford should keep on, I’ll even buy one I don’t yet need just to get in Corporatism’s face.

The congresscritters in Atlas Shrugged said things similar in meaning, but not one of them was so dumb as Maxine “Moral Hazard” Waters.

If they [banks] don’t come up with loan modifications and keep people in their homes that they’ve worked so hard for, we’re going to tax them out of business

The ways in which this is stupid are beyond counting, but one has to wonder what is Ms Waters plan if she destroys all the banks. Didn’t we just get done bailing them out?* Are they suddenly too resistant to making more stupid loans not to be forced to fail?

Ms Waters, of course, is the congresscritter who threatened to nationalize the oil companies, “[T]his liberal will be all about socialize [sic]…er, ah … basically, … about the government taking over and running your companies!” One can presume she means the same thing when threatening to tax banks into extinction. The “government taking over your banks and giving them to Fannie Mae.” We know how that’s worked so far.

Even aside from its lack of conciseness, “the government taking over and running your companies,” is not a good euphemism for “socialize.” It is far too straightforward. But Maxine Waters apparently didn’t even get the memo that the proper description of her statist policies is “progressive,” which at least has the virtue of moving the statists away from their appropriation of “liberal.” A word that doesn’t mean what they’ve turned it into.

*Including her husband’s to the tune of $12 million.

General Motors CEO Dan Akerson thinks the federal government should raise gas taxes by as much as $1 per gallon. He thinks this would make customers more receptive to smaller more fuel-efficient vehicles.

According to the Detroit News:

A government-imposed tax hike, Akerson believes, will prompt more people to buy small cars and do more good for the environment than forcing automakers to comply with higher gas-mileage standards.

GE already accomplished this with CFLs, so why not give it a try?

Anybody else see a problem with Government Motors petitioning the government for a tax hike?

…”Stuck In The Middle With You”
Apologies to Gerry Rafferty and Joe Egan.

There was whining in the letters page of the Lansing State Journal about GM spending millions on Superbowl ads. Oh well, I consider this to be a legitimate business expense. That doesn’t mean I like paying for it, but if they are going to sell cars, they need to advertise. The Superbowl is no worse a place to do that than the State Journal. Probably better.

There has been far less outcry regarding GM’s plans to pay major bonuses. The average UAW worker at GM is going to get around $4,000: Because GM has been “profitable.” I think GM should buy itself back from the US Treasury Department before it pays any bonuses. I’ll bet the bondholders who were told to pound sand in 2009 feel the same way.

And let us not ponder the $4,000 direct subsidy for every Chevy Volt built at a loss.

But if none of those expenditures bother you, try this blast from the past. In 2009, when the Feds took scalping knives to Chrysler and GM bondholders, the “new GM” was quietly allowed to carry forward $45 billion in net operating losses. This regulatory undersight will allow GM to avoid paying up to $16 billion in taxes on their “profits.”

The Obama administration appears ready to disregard years of precedent in bankruptcy and taxation law as it remakes the U.S. auto industry.

The latest example is the General Motors (GMGMQ) bankruptcy, where the intent is to have a newly created GM assume the benefit of tax losses at the old GM.

The problem, says Jeffrey Coyne, senior lecturing fellow at the Duke University School of Law and a management consultant who specializes in reorganizing troubled companies, is that tax losses can be passed on only to companies whose owners controlled at least 50% of the predecessor company. Since the start of 2005, General Motors has reported losses of about $87 billion.

“You can’t form new GM, which has never transacted business before, and sell the assets (of existing GM) and then sell the net tax benefit to the new company,” Coyne says. “And as far as I can tell, the NOL is not a saleable asset.” An NOL, or net operating loss, can be used as a tax loss carry forward, an accounting technique that allows it to be applied to future profits to reduce tax liability…

Coyne said… ‘The law is the law unless the government is a creditor.’

We bailed them out. We paid for their Superbowl commercials. We’re subsidizing the cars they build. And now we’re paying bonuses to the UAW.

Can anybody tell me how bonuses paid to any GM employee are morally different from the bonuses paid to AIG employees that caused so much angst? Well, let me suggest a couple of distinctions:

1- The AIG employees involved had nothing to do with the mistakes AIG made. They did not work in the division that brought AIG to its knees.

In GM’s case, the UAW – ably assisted by GM management – was directly responsible for GM’s demise.

2- Like the UAW bonus recipients, the AIG employees had contracts specifically including bonuses paid for performance. Those AIG employees achieved their goals – before AIG was bailed out. AIG’s bailout would have been much more expensive except for their success.

OTOH, UAW members were handed ownership of General Motors despite the fact they had performed at least as badly as had GM management for decades.

FERC YOU!
From the Wall Street Journal (requires registration):
The Midwest Wind Surtax

You’d think poor Michigan has enough economic troubles without the Federal Energy Regulatory Commission placing a $300 million to $500 million annual surtax on the state’s electric utility bills. But on December 16 FERC Chairman Jon Wellinghoff announced new rules that would essentially socialize the cost of transmission lines across 13 states in the Midwest…

Let’s be very clear on what’s happening here: Mr. Wellinghoff and FERC are trying to establish by regulatory fiat a national energy policy that Congress has refused to endorse. Last summer Congress rejected the Obama Administration’s renewable energy standard law because it would have inflated power costs. So the fiefdom at FERC is unilaterally moving ahead to require that industries and homeowners pay a surtax on their utility bills for a nonexistent renewable energy policy. This is similar to the EPA’s initiatives to regulate carbon even after Congress rejected cap and trade.

Because Iowa and the Dakotas want to build windmills, you (and taxpayers in Illinois, Indiana, Minnesota and Wisconsin) are going to pay to build new power lines to distribute the intermittent windmill electricity. This should become known as the “Dumb Grid.”

Without billions of dollars in new power line infrastructure, the windmills are uneconomic. However, like the health care individual mandate, I’m sure we will hear a defense of this based on the Commerce Clause: Michiganders must pay for windmill transmission lines they neither need nor want, because not to do so is a restraint of interstate commerce.

Imminently-former-Governor Granholm’s desire to manufacture windmills now moves from merely stupid to surreal. You are subsidizing the manufacture of windmills so they may be sold to people who have just arranged to tax you in order to enable distribution of electricity from the windmills. That electricity will charge the batteries Ms Granholm has also subsidized, in cars the Feds have forced you to pay for, built by a company whose union you were made to bail-out. All with no law being passed.

FERC may, justifiably, have assumed Michigan would be happy to cough up half a billion annually to subsidize other States’ crackpot energy schemes. “Green” – the hue of Frankenstein’s monster – “jobs.”

Fred Upton, call your office. And don’t return to this state unless you spike this taxation by the unelected of people they do not represent.