It’s easy to despair over the state of education from kindergarten through university these days. From public school teachers union presidents calling for strikes against in-person teaching via selfies taken in pandemic ridden Caribbean resorts, to an explosion of private school curricula teaching Critical Race Theory, to university professors criticizing MLK’s vision of color blindness. It is easy to believe that this strident group of so-called Progressives face little opposition. They’ve taken control, but we’ll see that they aren’t unopposed.

Exactly how over-represented Woke faculty is in these institutions is disputed. Most studies of this relate to higher education, where many Progressive academics say it isn’t really a problem. For them, it’s not. And, of course, they say also that about teaching a 6 year old white skin is the new original sin.

Wokeness to the contrary notwithstanding, freedom of conscience is a much rarer privilege in the ivory tower than it used to be. The screaming fits about pronouns, safe spaces, and… anything, really, they don’t want to hear, indicates that reducing that freedom has not gone far enough for the culturally over-caffeinated.

This survey, for example, shows an alarming (p.5) state of affairs for a temple of advanced learning. 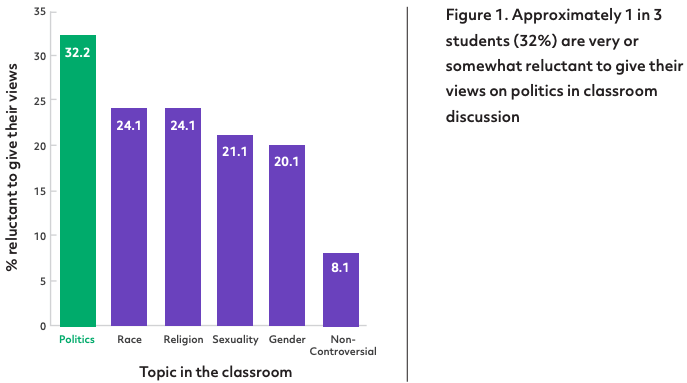 The selfie taking, CRT teaching, MLK revisionists will interpret this as “2/3 of college students feel they are free to speak about politics,” and as a good thing. Surely, there is at least a third of students who should just shut up.

I do wonder how any of the topics except maybe “Non-controversial” can be separated from politics. When tenured professors describe mathematics and Abraham Lincoln as racist, belief in biological sex as transphobic, gender as a limitless spectrum, and at least one religion as a colonialist evil, what is there that isn’t political? So, what questions did they ask to produce this chart?

Here’s the question asked about each topic, where the topic (Race or Politics, for example) is in the blank ______.

Think about being at your school
in a class that was discussing a
controversial issue about _______.
How comfortable or reluctant
would you feel about speaking up
and giving your views on this topic?

How the hell can you tell what’s “controversial,” when “all lives matter,” is a racist statement; and what wasn’t controversial this morning suddenly is, because someone accuses you of cultural appropriation for wearing hoop earrings; or you use yesterday’s pronoun for someone who changed ‘gender’ overnight? And who knows when the discussion you were comfortable contemplating in a survey might go all pear shaped in a micro-aggression minute?*

The survey captures a squishy overall sentiment, and tells me not much about the real extent of the problem.

In today’s climate how does one distinguish a discussion about race, religion, gender, or sexuality from a political discussion? Survey takers did, or the percentages would be identical. The categorization is in the mind of the person surveyed, and is related to how “mainstream” they think their opinions are. How did they mentally segregate gay marriage? Sex or religion? It’s definitely about politics. I’d check all three boxes. In any case, that 1/5 to 1/3 of students are uncomfortable speaking about any of those topics is a massive failure of the institution they attend.

In terms of measuring faculty and administrative tendency to claim speech is literally violence, I’d suggest leftist party affiliation and political donations are a rough proxy. How many political donors and how much they give is an indicator of campus culture. Though, since voter registration and donations are public information, a sufficiently strong campus cancel-culture could skew results.

TOC’s “academiots” tag has 62 references as I write this. Today, I’ve added a new tag, “acadissidents,” because as few as there are, and as unreported their dissent, they deserve support and encouragement. You could start by joining the Foundation for Individual Rights in Education (FIRE) in defense of UCSD professor Tom Smith at the first link below.

You could also periodically drop by Heterodox Academy, Hillsdale College. Legal Insurrection, New Discourses, Victor Davis Hanson, and Carpe Diem, to name just a few. Links to all in the blogroll.

A professor is under investigation for criticizing the Chinese government. Defend his rights with two clicks.

I Refuse to Stand By While My Students Are Indoctrinated

When the social justice mob came for me

You Have to Read This Letter

I try to stay aware of individual academics that might need financial support, and contribute a few dollars to them. This can be difficult, since GoFundMe will often cancel funding campaigns, but there are typically ways around that – like direct contributions through PayPal (not that PayPal isn’t “woke,” too).

There are people standing up for reason, at significant personal risk. We should have their backs. Many of them have experienced significant reprisals for exercising freedom of conscience; loss of employment, heavy legal expenses, doxxing, direct personal threats, and physical violence (see, for example, A Violent Attack on Free Speech at Middlebury) for daring to question SJW dogma.

*Since being on time is a white supremacist characteristic, maybe “minute” qualifies as a microagression.