Gun control zealots tell us the Second Amendment is an antiquated relic from which we should not take instruction. Even if it were not utterly dépassé, it doesn’t include an individual citizen’s right to bear arms. And even if there is a trove of evidence that the Founders regarded gun ownership as an individual right, that doesn’t count today because the Second Amendment is an antiquated relic.

Besides, the Founders were bigoted/sexist/racist/colonialists. And they were white. ‘Anglo-American,’ if you will. We must tear down monuments, rename all the things, and obliterate their legacy.

Such bans were also commonly applied to blacks in the American south. At the behest of the Democrat KKK: Blacks Used Gun Ownership to Fight the KKK (Cato Institute). For some reason, blacks didn’t have confidence in Democrat Sheriff Bull Conner’s willingness to defend them.

So, some Colonial statutes, like bigoted/sexist/racist/colonialist restrictions on gun ownership, turn out to be “rooted in the historical tradition of “Anglo-American” gun regulations,” and justify “New York’s [present day] “good moral character” clause, which allows officials to deny [firearm] permits to those they don’t feel are good people”. Emphasis mine.

“Anglo-American” privilege? It’s not racist/colonialist/sexist/bigoted when we do it. ‘We’ being the same people who deny self defense is a natural right.

Democrats advertise gun confiscation plans as “common sense.” One wonders what they make of Thomas Paine’s pamphlet of the same title.

Paraphrasing President Animatronic Simulation (no, that’s not redundant): “The government has F-15’s and nuclear weapons. Resistance is futile. Give up your guns.”

I do not think this demonstration of exactly why we have a 2nd Amendment was the intent. The intent was intimidation.

For an extensive look at what Joe’s remarks would entail, see this. It’s well worth reading in its entirety, but here’s a small slice from Larry Correia:

For those of you who don’t know me, I’m a novelist now, but I retired from the Evil Military Industrial Complex, where I helped maintain those various advanced weapon systems you expect to bomb me with. Before that I was a gun dealer and firearms instructor. So basically I sold guns to the people you expect the people I trained to take them from…

In something that I find profoundly troubling, when I’ve had this discussion before, I’ve had a Caring Liberal tell me that the example of Iraq doesn’t apply, because “we kept the gloves on”, whereas fighting America’s gun nuts would be a righteous total war with nothing held back… Holy shit, I’ve got to wonder about the mentality of people who demand rigorous ROEs to prevent civilian casualties in a foreign country, are blood thirsty enough to carpet bomb Texas.

Biden said, “If you wanted or if you think you need to have weapons to take on the government, you need F-15s and maybe some nuclear weapons. The point is that there has always been the ability to limit — rationally limit the type of weapon that can be owned and who can own it.”

“The Second Amendment, from the day it was passed, limited the type of people who could own a gun and what type of weapon you could own. You couldn’t buy a cannon,” Biden said. “Those who say the ‘blood of patriots,’ you know, and all the stuff about how we’re going to have to move against the government. Well, the tree of liberty is not watered with the blood of patriots.”

The lesson you’re missing, Joey, is “Don’t be a tyrant.”

Finally, I would be remiss if I didn’t remind you of Jill’s husband’s definitive advice on self defense. His acumen is on full display.

The ‘blindly shoot through the door’ bit is illegal everywhere in this country. No non-criminal gun owner would consider it. It puts innocent Fuller Brush salesmen (look it up) in special danger.

The ‘blast two shots into the air from your porch’ technique also violates basic gun safety rules, but more is more likely to wound some kid on a swing-set two blocks away than to even scratch the paint on an M-1 Abrams. I guess that’s the point. We don’t want our military hardware damaged and civilian casualties are collateral necessities in erasing civil rights.

“We’ll be together
for just a little while.
And then I’m gonna put you
way down here.”
-? and the Mysterians

The reasons anyone would prefer Joe Biden for president range from habitual ignorance, to Trump Derangement Syndrome, to race hustling therapeutic totalitarianism*. Unlike what we’re told is the only proper way to regard gender, however, this is not a spectrum. That is, there are only the three camps. They are not mutually exclusive.

The most numerous is the first; those the Democrat leadership regard as “Deplorables… but they’re OUR deplorables.”

Then there is the cabal of elite academicians, main stream media, deep state bureaucrats, social media crony capitalists, and Uniparty apparatchiks. They form the single nationwide Progressive ruling class – who are upset that Beltway corruption as usual is being revealed and threatened.

Finally, there are the anarchist foot-soldiers rioting, looting, and committing murder and arson.

The central point of agreement seems to be that the United States is a malignant society that merits punishment.

I started to list more specific policy reasons not to vote for Joe Biden, but sickened of it. I want to pass along, however, something I received from a friend that prompted the attempt.
Why Did it Have to be … Guns? by L. Neil Smith

And here’s a related piece on the same topic I reread every few months.
Ethics from the Barrel of a Gun

The masks have dropped on much of the collectivist agenda. Perhaps none more so than Biden’s promise to put Beto “Hell, yes, we’re going to take your AR-15, your AK-47.” O’Rourke in charge of banning guns.

I’m not sure who she is, but she obviously thinks she has a right to physical protection. I agree with that bit. Unfortunately, I can’t afford armed guards.

My armed guard (me) sometimes carries a semi-automatic handgun and sometimes a revolver. In both cases, one squeeze of the trigger produces one discharge. The main difference is that my usual semi-auto carry holds 7 rounds and my usual revolver carry holds only 5.

If I were hired to defend someone else, I’d be less concerned about comfortable carry. I’d be much less concerned that someone could tell I had a firearm: Maybe it’s a deterrent if you realize someone has a professional armed guard you have to shoot first?

Since I’d be more concerned about multiple assailants, I’d definitely carry something that held 10 or more rounds: I.e., a larger semi-auto. If Ms. Handler’s guards aren’t doing so, then she should fire them.

I’m not shooting any children, either.

No. If I can’t defend myself with a gun, Ms. Handler can’t be allowed to let someone else defend her with one.

And, you know what? If I thought I needed armed guards, I’d still carry my own. Especially then.

Not the NRA; not people who voted for Donald Trump; not people who own guns, who like country music or pickup trucks: No one* wants it to be possible for a Stephen Paddock to murder even one person with a gun. However, none of the political policies put forward to ban or restrict weapons and ammunition actually address the problem. No one proposing them is able to say what set of laws could have prevented the Las Vegas massacre. They appeal to magical thinking.**

There’s a good reason for that. From the Washington Post:
I used to think gun control was the answer. My research told me otherwise.

Leah Libresco is a person who dislikes guns, but she follows the evidence instead of the cynical talking points.

By the time we published our project, I didn’t believe in many of the interventions I’d heard politicians tout. I was still anti-gun, at least from the point of view of most gun owners, and I don’t want a gun in my home, as I think the risk outweighs the benefits. But I can’t endorse policies whose only selling point is that gun owners hate them. Policies that often seem as if they were drafted by people who have encountered guns only as a figure in a briefing book or an image on the news.

I don’t expect this article will change the calculations of politicians and anti-Second Amendment types who can’t bear wasting any fundraising crisis, but any reasonable person – especially including those who dislike firearms – will gain from reading it.

Thank you, Leah Libresco, for your courage and honesty.

Read the whole thing, and the links there are also worth checking out.

**Democrats Have No Idea How To Prevent Mass Shootings

No, they were intended to suggest he should be shot in the head for speaking in favor of the Second Amendment. Or, if he was shot in the head, it would at least be deserved. 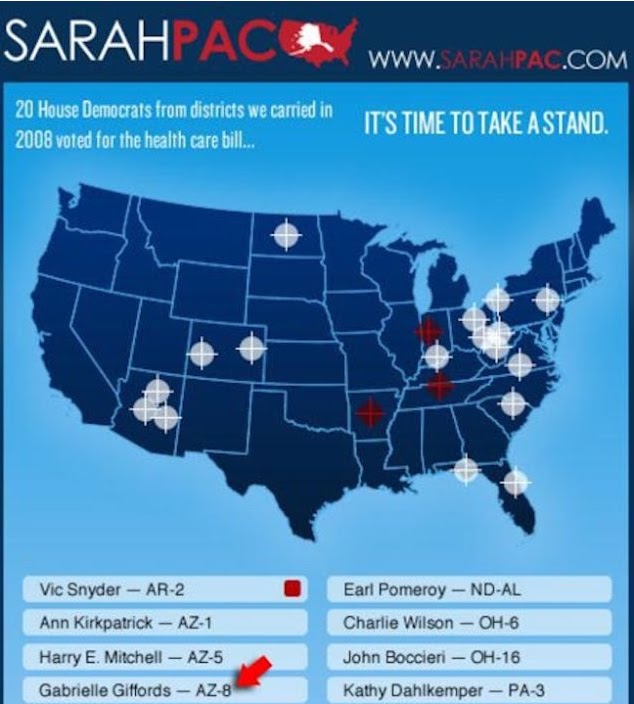 Proved Sarah Palin was a deranged would be assassin. 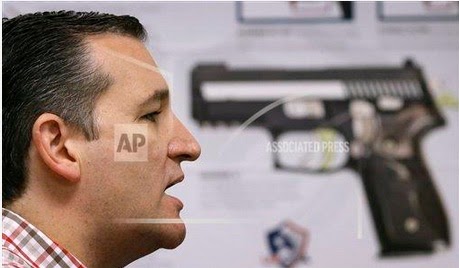 Photo (by Charlie Neibergall) proves the Associated Press is an unbiased news organization.

Doubt it? Then name me a Progressive who’s complained that the picture of Ted Cruz promotes gun violence.

OK, let’s say you cheated and named yourself. The second requirement is to tell me what you think would have happened if, instead of Cruz, it had been Mrs. Bill or this guy: 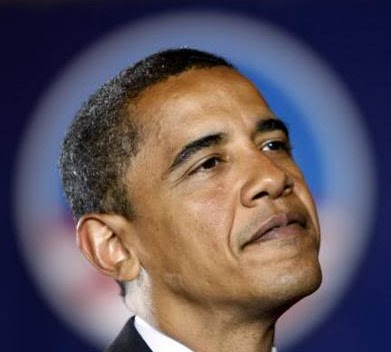 Today is the 5th anniversary of the President’s monetary stimulus, but at TOC we’re celebrating the only Obama stimulus that actually worked.

It created jobs, boosted private sector manufacturing and encouraged people to appreciate the Bill of Rights. Of course, none of that was intentional.

It’s tapering now, but the results are still far above pre-stimulus levels. CNN would have you believe otherwise in their headline, Gun sales are plunging, but the real story is a bit different:

Gun sales are dropping this year, according to FBI stats, but they still exceed sales from before Obama’s reelection and the Newtown massacre…

“So we have come down from the peak but the valley floor is higher than before Nov 2012,” said Keane, in an email to CNNMoney. “The consumer base has grown. This is because for the past few years, retailers tell us that about 25% of customers at the checkout counter are first-time buyers.”

There are only so many first time buyers, but I’m guessing many of them will eventually want another gun.

Ammo sales have also tapered off:

Maybe the prices will fall back, too.