Like MAGA, ‘fascism’ is only two syllables. President Biden can say both reliably. His caretakers took a risk, though, when they handed him “semi-fascist.” Leaving us all to wonder which parts of actual fascism were covered and which were not. Turns out not to matter, because he doesn’t know what the root word means.

AFAIK, he’s been getting that four syllable variation right so far, even if neither he nor his affirmative action press secretary have been willing or able to define it.

Willy-nilly throwing out the word fascist and vilifying half the population of the United States in a political speech is his idea of unifying the country: Last Thursday, our President could be found driving his message home by posing before shadowy Marines (Think about that. It was a political speech.) before a background of dim blood-red lighting shining on Independence Hall. Anyone see projection here? Or, an historical reference? 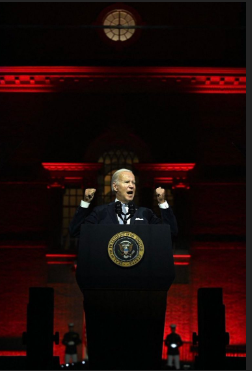 In keeping with the carefully constructed atmosphere, the President delivered a speech worthy of the Italian socialist who invented Fascism. Mussolini was a better speaker, and a more accomplished and erudite man than the President.

The President should ask Karine Jean-Pierre to read Angelo M. Codevilla’s 2020 article to him. Then they’d both have a better understanding of what they’re playing at:

The Original Fascist
I’d recommend reading it yourself. An excellent history lesson. A fantastic insight into how we came to have a President calling everyone who doesn’t vote for “Our Democracyts” a fascist.

A slice from Codevilla:

“Socioeconomic organization was fascism’s defining feature. Only employers’ and employees’ organizations approved by the government were allowed. They represented and collected dues from any and all in their category and territory, whether these had signed up with them or not. [Like taxpayers and student loans.] In 1925 these had agreed “voluntarily” to recognize each other as “exclusive representatives,” to subordinate interactions at the local level to central organizations, and to draw up procedures for their cooperation under government supervision. The Law of Corporations of April 3, 1926, codified this political-economic order. No longer would corporations be responsible to owners. Thenceforth, they would answer to higher duties as defined in the law. As Mussolini put it, “In a world of social and economic interdependence…the watchword must be cooperation or misery.” “Labor and capital have the same rights and duties. Both must cooperate, and their disputes are regulated by law and decided by courts, which punish any violation.” This resulted in the orderly servicing of interest groups, fascism’s daily preoccupation.”

What is the word to describe the fact that the FBI ‘advises’ Silicon Valley crony-capitalists on censorship, just days before a Presidential election, as news damaging to their preferred candidate is breaking? What is that word when the White House makes lists of “problematic posts,” then threatens those same corporations with: “Root out misleading speech or be held accountable?”

One might assume these left wing corporations are merely following their natural inclinations to help a sympathetic government suppress stories they both don’t want publicized. It’s “like minded” fascism: Simple cloth masks retard CCP virus transmission. The vaccine prevents disease transmission. Natural immunity is not as good as a vaccine. Hunter Biden’s laptop is Russian agitprop. Trump paid Russian prostitutes to piss on a mattress. Shutting schools won’t harm children. The United States didn’t fund gain of function research by the Chinese. Trans “women” are biologically identcal to males for every purpose, but especially sports and incarceration. If you disagree, you are a fascist. Ipso facto.

It could be a natural inclination for the Masters of the Metaverse. It also could be called collusion. Turns out the latter is most likely.
Over 50 Biden Administration Employees, 12 US Agencies Involved In Social Media Censorship Push: Documents

What do you call a government which seeds the same outlets they suppress with a fantasy dossier, and then uses the news coverage generated by that leak as a basis for secret surveillance warrants? Is that “like minded” fascism, “collusion” fascism, “conspiracy” fascism?

Here are some of the latest individual receipts for such government manipulation:
Twitter, Facebook Regularly Coordinated With Biden Admin To Censor Users

The White House and the FBI are prevaricating about these stories, but what do you call a government which tries to regularize corporate censorship at state direction by creating a “Disinformation Governance Board”

The Disinformation Governance Board was so outrageous an idea they had to rename it. Ministry of Truth had already been taken, so now it’s an ‘internet policy task force’ led by Kamala Harris, “with goals including “developing programs and policies” to protect “political figures” and journalists from “disinformation,” “abuse” and “harassment.””

Used to be that ferreting out “disinformation,” and “harassing politicians” was the job journalists did.

So what’s the word for this set of corporatist rules? Here’s a hint: it takes the ‘semi’ out of “semi-fascist.”

That Italian I mentioned provided the rationale in the 1930s:
-1-:

State intervention in economic production arises only when private initiative is lacking or insufficient, or when the political interests of the State are involved. This intervention may take the form of control, assistance or direct management.

The Fascist conception of the State is all-embracing; outside of it no human or spiritual values can exist, much less have value. Thus understood, Fascism is totalitarian, and the Fascist State–a synthesis and a unit inclusive of all values–interprets, develops, and potentiates the whole life of a people. (p. 14)

The Fascist State lays claim to rule in the economic field no less than in others; it makes its action felt throughout the length and breadth of the country by means of its corporate, social, and educational institutions, and all the political, economic, and spiritual forces of the nation, organised in their respective associations, circulate within the State.

One more piece of Codevilla’s article is worth looking at in thinking about the history of Fascism in the United States.

The initial impetus came from a man who disdained the Constitution and got the transfer of power into the hands of the the Executive Branch rolling: Woodrow Wilson.

A cursory look at Wilson’s comments will demonstrate this, as well as the fact that he was a racist of the first water.

But the ball really got rolling under another President, a contemporary and admirer of Mussolini, Franklin Roosevelt:

“The view that the New Deal was “fascism without the billy clubs” was well-nigh universal among FDR’s opponents on the Left (e.g. Norman Thomas), as well as on the Right (Herbert Hoover). It could hardly have been otherwise since the essence of the National Industrial Recovery Act—the involuntary inclusion of all participants in categories of economic activity and their subjection to government-dictated prices, wages, and working conditions—was at least as detailed as those in fascism’s corporate law. The U.S. government had brushed aside the Supreme Court’s objections to the National Recovery Administration in A.L.A. Schechter Poultry Corp. v. United States (1935). By 1942, in Wickard v. Filburn (still “good law” today), the Court approved regulation of all manner of enterprise with reasoning stricter than any Mussolini had used in 1926. Today, by the same token, Senator and 2020 presidential candidate Elizabeth Warren’s proposed “Accountable Capitalism Act” would also force corporations to enroll into a legal scheme in which the government would force them to service various stakeholders as government regulators would decide from time to time. Such tools are far more powerful than billy clubs.

Until 1935 New Dealers, though careful not to add to their opponents’ ammunition, did not hide their administration’s kinship with what the Fascists, Nazis, and Communists were doing to redirect the societies over which they ruled. Secretary of the Interior Harold Ickes thought that “what we are doing in this country is analogous to what is being done in Russia and even under Hitler in Germany. The only thing is that we do it methodically.” FDR himself referred to Mussolini and Stalin as “blood brothers,” and spoke of having private contacts with Mussolini. “Mussolini,” he said, “is interested in what we are doing, and I am struck by how much of his doubtless honest programs to reform Italy he has accomplished.” Brain-truster Rexford Tugwell thought that the fascists had done…”

many of the things which seem necessary to me. At any rate, Italy has been rebuilt materially in a systematic manner. Mussolini has the same opponents as FDR, but he controls the press, which prevents them from daily spreading their nonsense. He governs a compact, disciplined country, despite insufficient resources. At least on the surface, he has achieved enormous progress.

So, for a man of limited intelligence, and even less erudition, tossing the word fascist about as if it were anything but a convenient epithet is a mistake. That is not to say that such men do not have a long tradition here. Mostly they are Democrats. Whose Blackshirts, Antifa, are anything but anti-fascist.

Think of fascism today as the administrative state. The “swamp.” Who are its standard bearers?