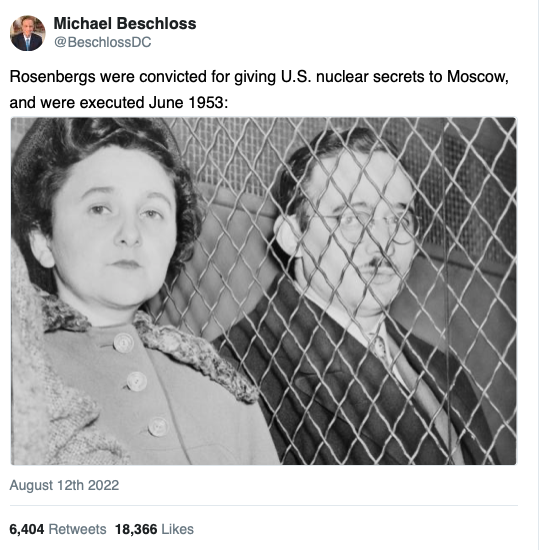 That’s Presidential Historian and Progressive darling Michael Beschloss hyperventilating because of the current justification from our Federal explainers for the FBI raid at Mar-a-Lago: Trump had “nuclear documents” squirreled away.

Really? A former President proven to NOT be a Russian collaborator by the Democrat’s hand picked special prosecutor despite the lies of the FBI? The same President the Prog’s should acknowledge wouldn’t give nuclear secrets to China because they know he’s a racist? The President whose Iran and North Korea policies were anathema?

He’s just like the Rosenbergs and should face the death penalty.

If only he’d cut the papers up and smuggled them out of the White House stuffed in his pants according to Sandy Berger’s example, we could string him from a lamp post without bothering the judiciary.

Nuclear documents? What, like launch codes? Schematics? Locations? What are we talking about here?

What did they think the guy was going to do with this stuff? Is any of it even current? Don’t they change the launch codes every day? And nobody missed these documents for 18 months? What’s the danger here?”

The danger is Trump might be re-elected in 2024. My guess is that the Swamp dwellers have just increased that possibility.

It’s not like the FBI and DOJ haven’t publicly and dishonorably acquitted themselves for a decade now.