Glenn Greenwald’s Tweets on the hissing pussycats at “Robin D’Angelo Junior High — also known as the national desk of The Washington Post” are devastatingly hilarious. It’s a left-on-left tag-team cage-match.

No idea who Cam Harless is, but he’s irrelevant after the internecine bombardments commence. Felicia Sonmez is an aggrieved WaPo reporter, who seems unaware that “believe all women” is over since Robby Mook’s implication of Hillary Clinton in the Steele dossier psy-op. Not to mention Amber Heard, for whom I’ve heard a personal “poop emoji” has been created.

Greenwald’s commentary caught my attention because of his victim point scoring comments (below). Because, in a 2019 post – Victimhood competence hierarchies – I attempted to describe the tools needed for sorting out the victimhood pecking order. A slice from that post:

Let’s consider the complexities via example. Rate a black, homosexual male, wealthy actor; vs. a white, trans-female, wealthy former Pentathlon champion; vs. a brown, female, anti-semitic, Islamist congressional member; vs. a white, 1/1024th Amerind, biological female, wealthy United States Senator. It’s not easy, and those are only a few of the factors. The enterprise seems very difficult. 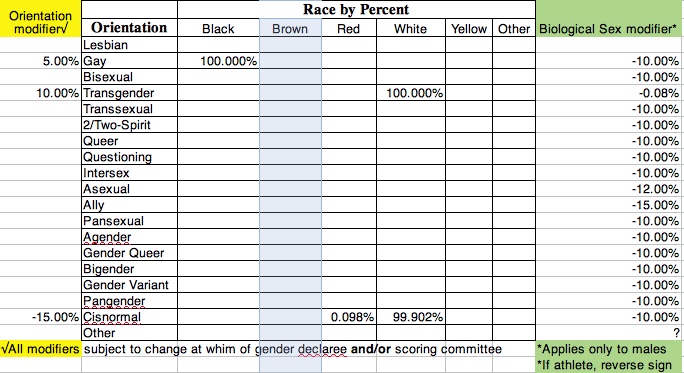 This is the type of analysis intersectionalists demand as a principle of governance. And, that’s just a poor preliminary attempt to begin to capture the variables currently driving the SJW power struggle. It doesn’t include anywhere near the required profile information. I tried filling it in for a couple of people I thought would help refine scoring. Maybe you can guess who they are.

Complicating this further, just when you might think you have a workable algorithm, someone gets offended by something you did not expect. For example, here’s an example of a lesbian, trans, Leftist, female academic in the Humanities you’d expect to score moderately well even if she is white: A concrete example against which to test our calculation of the victim/oppressor ratio.

If you think the Progs would by now have established their own official scoring system, you’re missing the point. They all aspire to be Thomas Wolsey or Torquemada in a quest to adjudicate their own martyrdom. Any reference to a set of rules could inhibit the exercise of power.

I noted the victimhood ranking problem 5 other times (now 6) under the tag ‘victimhood competence.’

Anyway, this is the snippet that caught my eye:

After WPost reporter @Feliciasonmez publicly accused multiple Post reporters and editors — including @jdelreal — of supporting misogyny against her, Del Real retorted that he was the only Mexican American on the national desk and also gay. Experts are tabulating the outcome.
…
For those scoring the various victimhood points at home, among the starring marginalized actors in the WPost oppression drama, 2 are graduates of Harvard University (Sonmez and Del Real) while the other was raised in Greenwich, CT, and educated in Swiss boarding schools (Lorenz).