Gaslighting is an emotionally-abusive strategy that causes someone to question their feelings, thoughts, and sanity. Someone who employs gaslighting tries to convince the other that their own perception of reality is wrong. The purpose of this is to convince the person being gaslit that they can’t trust their own instincts or thoughts. A gaslighter may try to convince you that your memories are incorrect, that you overreact to situations, or that something is “all in your head.” They may then try to convince you that their version of events is the truth.

“Somehow we have to figure out how to boost the price of gasoline to the levels in Europe.”

In the month before the Obama administration assumed office, the average price for a gallon of gasoline in the United States was $1.59. This week, [April 1, 2012] the price of gasoline has climbed to $3.79.

The Biden administration resumed Obama’s sabotage of our domestic oil and gas producers on day one. The average price for gasoline at the end of Biden’s first week of office was $2.39 a gallon. Prices have now hit above $4. 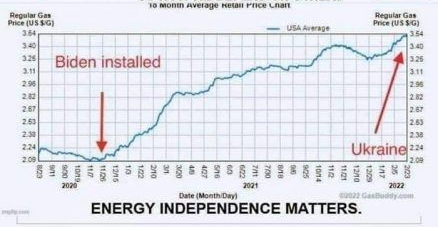 The Democrats, having pummeled investment in oil and gas extraction, pretend that production can be flipped like a light switch. Jen Psaki tells us there are “9,000 leases not being exercised.” This may be true, but it is entirely unrelated to the fact the United States is no longer energy independent. How does that even happen in under 12 months?

Leases not in use is a factoid servicing a Big Lie.

“A lease is but one element necessary to overcome to get oil to market: “Copious permitting paperwork over a period of months or years, financing from banks and investors being pressured to disinvest, means of getting the crude to refineries, refining capacity, taxes that threaten return on capital, and legal challenges.”

That’s a great summary of this must read article:
In-depth analysis debunks Biden admin blaming oil companies for not developing 9000 leases – Feds ‘spent over a year making it more difficult’ to drill & environmentalists ‘constantly sue to stop any development’

With Putin’s invasion of Ukraine the plot has gotten out of hand for the President. So, he complains that the oil and gas producers aren’t doing enough. Putin provides Democrats more cover for the real Green Ordeal objective, described masterfully in this excerpt from a book review by Peter W. Wood of Bewilderment, a novel by Richard Powers: RTWT.

[T]he real endgame is a remnant human population on a vegan diet perhaps supplemented with insects; the restoration of Earth’s landmass to animal-friendly wilderness; and small-scale cooperative (socialist) societies living in harmony with nature. Less utopian versions of this vision are available, but properly understood, all of them rule out modern life as we know it. People like Biden don’t take any of that seriously. Their interest is in the political game, not the endgame, but it is important to understand the premises and the motives of the activists who are driving the politics. They may never get their utopia, but they can cause profound misery in their attempts to reach it. And we are seeing some of that now.