Loosely organized things that struck me.

Below is a simple comparison of English speaking volunteers who were asked if a particular string of letters was an English word they recognized. Knowing a definition was not required. Made up ‘words’ were included, and marking one of those as a real word was penalized.

These words showed the largest gap between male and female recognition.
Table 2 Words known better by males than by females (left), and vice versa (right) 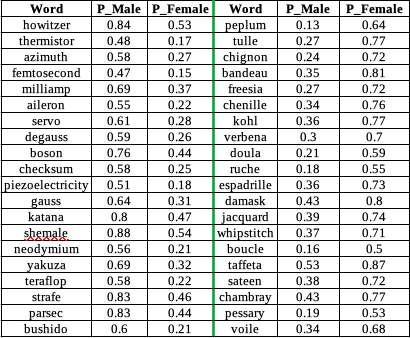 I sent that table to a friend and he replied: “A rebuttal to arguments that there are no differences between men and women.” Indeed.

You will quickly see an overall pattern. The blank slate crowd will argue that this pattern is entirely a symptom of social conditioning. This is a key tenet of identity politics. Any disparity between groups is solely a result of pernicious thinking which can be corrected by the State.

Totalitarian utopias (a redundancy) depend on the idea that human minds can be conditioned to think only State approved thoughts. Those who think human minds have no inherent structure, and can be inscribed at will by society, could benefit from a little research into the science. Two short suggestions. One. Two.

Anyway, I was curious about the chart and the study that produced it. The test is so simple that the only bias would be based on individual vocabulary. Which is what the test is measuring.

I’ve been looking at the M/F table a bit, rating my own knowledge and wondering about patterns and oddities. I could define all the male-side words and half the female-side ones. I knew 9 of those were fabrics, but I couldn’t have told you the difference. This proves females have been conditioned by the patriarchy to be more concerned about style than STEM.

There were 4 words I didn’t know were words: I’m not sure I’ve ever seen whipstitch, peplum, or boucle. I also didn’t know espadrille, but had to look twice to see it wasn’t escadrille, which is how I initially read it. On reflection, it seemed unlikely that women would be more knowledgable about French air force squadrons than men. Espadrille (is that also the plural?) are shoes. My mistake proves I am a programmed dupe of the patriarchy.

Of course, I then had to download the full spreadsheet to see if escadrille was in the 62,000 words. It was.

Gives you an idea about the magnitude of the research.

I noticed the highest recognition percentage for both sexes in the male column is for one word – “shemale.” “Taffeta” is that word on the female side, at very nearly the same ratio. It’s a curiosity that there’s one word on each list that has the highest recognition factor for both sexes. You see below that I would have expected that word to be jacquard on the female side.

Turns out to be true for damask and jacquard, too. ;)

If they run this study again, they should ask about sexual orientation. We need a column of words known by men who think they are women.

Words with multiple definitions… or, at least, pathways to recognition. Jacquard, for example, could be recognized as a digital loom, or as the fabric it produces. That’s partly a STEM vs. fashion distinction. The male side of the table is mostly STEM, while the female side is preponderantly related to appearance (fashion/makeup). You might expect more men to recognize jacquard than chambray, taffeta, or damask, but they don’t.

If you are curious about the methods used in this experiment, it’s worth reading the short abstract here: Word prevalence norms for 62,000 English lemmas
A lemma is the word that appears as an entry in a dictionary, it stands for all forms of the word. “Build” is the lemma for “builds”, “building”, “built”, etc..
Here’s the intro:

Other rabbit holes:
Discussion at ycombinator
Reddit thread
The 24 Words That Are Most Known To Only Men Or Women – 2014 results of the same study