UPDATE: 12:15PM, Feb5
GoFundMe has shut down the Freedom Convoy account and threatened to give the money to charity. They indicated contributors would have to apply for refunds. They’ve backed down and will be issuing refunds automatically.

Meanwhile:
Verified Information on Where to Safely Donate to the Freedom Truckers Convoy

It’s approaching a million dollars as I write.

A night with the untouchables
Written by a civil servant in Ottawa who lives where the protest is happening. Worth the read.

Back to our regularly scheduled program…

You may be aware that thousands of truck drivers in Canada formed a convoy 45 miles long and drove 2,000 miles to protest Canadian Prime Minister Justin Trudeau’s CCP virus pronunciamentos. Overpasses along their trek thronged with cheering supporters.

The convoy arrived in Canada’s capital last weekend, and Ottawans’ lives have since been disrupted by clogged streets (lanes are open for emergency vehicles), liberal use of air horns (stopping at six PM), and protestors marching around the Parliament buildings chanting “Freedom!” And occasionally taking time out to shovel snow in public spaces, or build a mobile soup kitchen to feed Ottawa’s homeless.

The truckers, and a growing majority of Canadians, think Canada’s CCP virus rules should follow the science. That is, the rolling imposition of limited martial law should cease.

They think the Trudeau hegemony has again misinterpreted Canada’s mission statement: “Peace, order, and good government”. The truckers are leading the debate, “Resolved: Canada does not have the good government required for peace and order.”

“Peace, order, and good government” is not so presumptuous a demand as “Life, liberty, and the pursuit of happiness,” nor as prone to excess as “Liberté, egalité, fraternité.” The Freedom Convoy protest, befitting Canada’s image, is preponderantly polite. In no way comparable to the “stop-the-steal” riot on January 6th/20 in Washington, nor to the gilet jaune street fighting September 12/20 in Paris.

No injuries, no deaths, no riots in the last four days in the nation’s capital, even though we have a global cause, national protest.

By February 2nd there had been 3 arrests in an estimated 10,000 protestors.

The contrast with our Jan/6 riot and the Antifa/BLM planned insurrections is inconvenient for the laptop class and the Trudeau government. They need vicious oppressors. So Ottawa’s Globe and Mail, a government subsidized enterprise, finds a way to vilify the truckers:
Calling the Ottawa protests ‘peaceful’ plays down non-violent dangers, critics say

“Police haven’t reported any physical violence at the ongoing Ottawa rally against vaccine mandates and other government-imposed COVID-19 restrictions, but critics warn that conflating the absence of bloodshed with “peaceful” protest downplays the dangers of the weekend demonstrations.”

Among the dangers the Bytown anointed have cited was one guy carrying the Stars and Bars. There’s video of him being shamed and driven away by the truckers. That’s a literal false flag.

Someone painted a swastika on a Canadian flag, leading to charges the truckers are Nazi sympathizers. The strikingly more obvious interpretation is that the painter was calling Trudeau a fascist wannabe.

A woman was seen, arms in air, shouting “Freedom!” while standing on the base of the National War Memorial. This action has been described as “desecration.”

It is a beautiful and evocative statue, deserving reverence and protection: 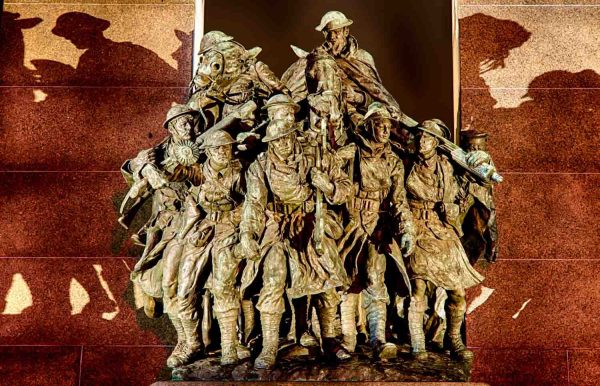 So far it has not been targeted for destruction by BLM or Antifa. But the subjects are imperialist white male warriors, so it’s only a matter of time. You do have to wonder whether the men depicted would feel disrespected sharing a plinth with someone shouting “Freedom!’ in the context of CCP virus tyranny.

They were soon to be exposed to the Spanish Flu pandemic. I imagine their reaction to mandates and lockdowns would be less compliant than Justin would prefer.

Someone hung a Maple Leaf flag upside down on the statue of Terry Fox. The left was apoplectic. This statue has been dressed up many times in the past without comment from the petty totalitarianate.

A CBC newsbimbo suggested that Russia was secretly organizing the protests.

Somehow these deplorable truck driving cretins must be driven from polite society, castigated, cancelled, shamed. Canada’s precedents for using nebulous complaints from far-left activists to punish speech are well known. Mark Steyn made some of them famous.

One of CNN’s iconic contributions to Newspeak was displaying the phrase ‘mostly peaceful’ over live images of burning buildings. Having described protests involving murder, looting, arson, and vandalism as ‘mostly peaceful’, what do you do when a you need a condemnatory description of protests that involve no class A felonies? Well, war is peace and freedom is slavery. Just follow your 1984, or the Globe and Mail stylebook.

‘Dangerous non-violence’ is justification for making Thoughtcrime up as you go along. Ideas are too dangerous to trust them to free citizens.

It’s disappointing, really. These truckers went to a lot of trouble to gently stir up some shit. Even with the distinct lack of felonies… couldn’t we at least call it ‘barely raucous?’

No. No agency must be granted to these unacceptables. The Prime Minister is channeling Hillary Clinton:

“The small fringe minority of people who are on their way to Ottawa, or who are holding unacceptable views that they’re expressing, do not represent the views of Canadians…”

According to this Angus-Reid poll, Pansy McBlackface is claiming 54% of Canadians hold unacceptable views. Even Hillary only called half of Trump’s supporters deplorable, not more than half the whole population.

Not to be outdone, the leader of Trudeau’s partners, the New Democrats (think Bernie, AOC and Omar), played the race card:

“Conservative MPs have endorsed a convoy led by those that claim the superiority of the white bloodline and equate Islam to a disease.”

Wow. Maybe he gets his world view from Whoopi Goldberg.

Finally, displaying the cluelessness for which he is justly famous, Ontario’s Premier:

“It’s time to let the people in Ottawa get back to their lives,” Premier Doug Ford says on fifth day of convoy demonstrations.”

Doug, you portly pontoon, it’s time to look up the word “irony.” THAT MESSAGE is WHOLLY OWNED by the protestors. YOU CAN”T POLITICALLY APPROPRIATE “Letting people get back to their lives.” The Freedom Convoy hasn’t even had their 2 weeks to flatten the curve.

Further reading on freedom of conscience in Canada:
Lessons from Canada
The Chief Canadian Human Rights Commission investigator testifies in 2008, “Freedom of speech is an American concept, so I don’t give it any value.”
Touquemada™
Until freedom “of thought, belief, opinion and expression” is seen in Canada to actually be a fundamental right it will simply be a matter of how much freedom of speech Parliament thinks is good for you.
The View from Dromore – Free Speech in Canada?
A Canadian citizen comments in 2008.
The first 100 days: Major battle over free speech, internet regulation looms when Parliament returns
Section 13 is coming back.
Canadian Father Jailed For Talking About Court-Ordered Transgendering Of His Teenage Daughter
He must use the ‘correct’ pronouns.