I remain mystified. How has NCAA women’s basketball avoided a tsunami of Males Pretending to be Females? That’s MPtbF, for short.

NCAA is an organization that moves tournaments and championship games out of states daring to impede the destruction of women’s sports by trans ‘women’. They are fully committed to this phantasmic policy. They have abandoned any defense against MPtbF who want to play basketball against females in NCAA sanctioned contests.

When will MPtbF start seeking some of the billion dollars in NCAA women’s basketball scholarships?

My puzzlement was not reduced by discovering that the first MPtbF to play women’s basketball in the NCAA won’t be the first, by a longshot, to play at a college. Mission College, Santa Clara, CA had a male playing for their women’s basketball team nearly a decade ago. Under the aegis of the California Community College Athletic Association.

He was 50, so his implied lack of speed and/or stamina could have accounted for his less than stellar first season.

In the 2013-2014 season not only did some female fail to make the team, another sat on the bench. To indulge Gabrielle Ludwig.

Here’s Ludwig compared to ‘her’ ‘peers’: 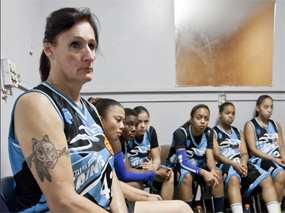 That physical difference above is not distorted by the perspective: 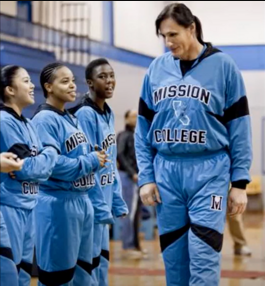 Alas, the time when you could get away with the sneer quotes around ‘woman’ is past:
50-year-old transsexual ‘woman’ makes college basketball debut

Central Valley Conference, Commissioner Logan McKechnie said, while Luwdig is tall, his state certification as a female is all that matters. “I don’t think, frankly, fairness enters into it,” he said.

Another commissioner, Dale Murray of the Coast Conference, believes Ludwig is evenly matched with his competitors and “just happens to be a bit taller than everyone else.”

Others question whether a player with Ludwig’s attributes belong in an all-female sport.

One of the people Ludwig faced off against in a recent game described his style as “real physical.”

Ya think? He’d be pretty physical just standing there if you were 5’5″ and 115 pounds.

Fairness, indeed, isn’t a word you could employ. Nor ’embarrassment.’ Nor ‘shame.’ Narcissism? Sure.

There’s a sympathetic USA Today story that indicates Ludwig wanted to play because he loved competitive basketball. I don’t know about you but my definition of competitive includes a large dose of ‘fair’.

Playing against women, in front of spectators, was at least as important to him as a love of the game. He could have played in a pickup league.

I don’t care about Ludwig’s perception of his body, it’s his business. I do care that he, and the state of California, felt he had a right to play basketball against shorter, smaller, weaker opponents – by taking the place of another. He is not a woman physiologically, so his mental state was what was made to matter for his opponents, teammates, and CA taxpayers.

Check out Save Women’s Sports for the physiology point. No amount of testosterone deprivation or surgery could make Ludwig a woman.