How did curiosity about potential drugs for CCP virus prophylaxis become so politicized that stupendously obvious lies are a journalistic norm? And defending the lies a rite of passage?

Joe Rogan must be suppressed because of ‘Progressives’ need for control and status? Because he is dangerously popular and might encourage narrative questioning? And because this sort of distortion gets clicks for RS from the elect, elite, anointed cadre wannabes who represent its shrinking audience?

Ivermectin, according to the National Center for Biotechnology Information, is a wonder drug on the order of penicillin and aspirin:

…ideal in combating two of the world’s most devastating and disfiguring diseases which have plagued the world’s poor throughout the tropics for centuries. It is now being used free-of-charge as the sole tool in campaigns to eliminate both diseases globally. It has also been used to successfully overcome several other human diseases and new uses for it are continually being found…

There are few drugs that can seriously lay claim to the title of ‘Wonder drug’, penicillin and aspirin being two that have perhaps had greatest beneficial impact on the health and wellbeing of Mankind. But ivermectin can also be considered alongside those worthy contenders, based on its versatility, safety and the beneficial impact that it has had, and continues to have, worldwide—especially on hundreds of millions of the world’s poorest people.

The world’s horse population may be around 60 million: Ivermectin is primarily a human drug, unless those horses are each being dosed… very frequently.

And ivermectin is less dangerous to humans than omeprazole (Prilosec), another human drug used in horses. As are most all drugs given to horses. Should omeprazole be called “horse gastritis preventer?” After all, the NCBI speculates that omeprazole could have a role in CCP virus treatment.

RS doesn’t even have enough respect for their audience to use a stock “people queued up” photo appropriate to the season. Which is probably fair enough for people convinced no one but them can understand the words “proper dosage.”

These are same nanny-statists who think no-fly lists are appropriate for unvaccinated American citizens; and simultaneously excuse spewing illegal aliens country-wide without testing for CCP virus. Where’s Biden’s “infrastructure project” to at least force the illegals to mask up?

Aside from sheer perversity in forcing others to wear masks and the smug satisfaction they find in pretending only they “follow the science,” they also see an opportunity to impoverish humans in the name of Gaia – as noted in this Nature article. It’s the same shit sandwich, on slightly different bread.

We haven’t built the nukes that would have solved their CO2 problem because they wouldn’t allow it. Having precipitated the problem, their “solution” is for the rest of us to freeze in the dark or bake in the sun; drying clothes and cooking on their schedule. I think we can be sure this only applies to flyover country.

They won’t be applying the carbon allowance to air conditioning in DC any time soon. No, there will be conditions. Those people have to be kept comfortable enough to plot the Afghanistan withdrawal, and the next phase of money printing.

Meanwhile, here in Michigan, Consumers Energy offers incentives to reduce the 50% summer surtax they’ve imposed on electricity between 2PM and 7PM because their windmills and solar panels are inadequate, and because they’ve decommissioned some nuclear plants. Control my thermostat? Two words. 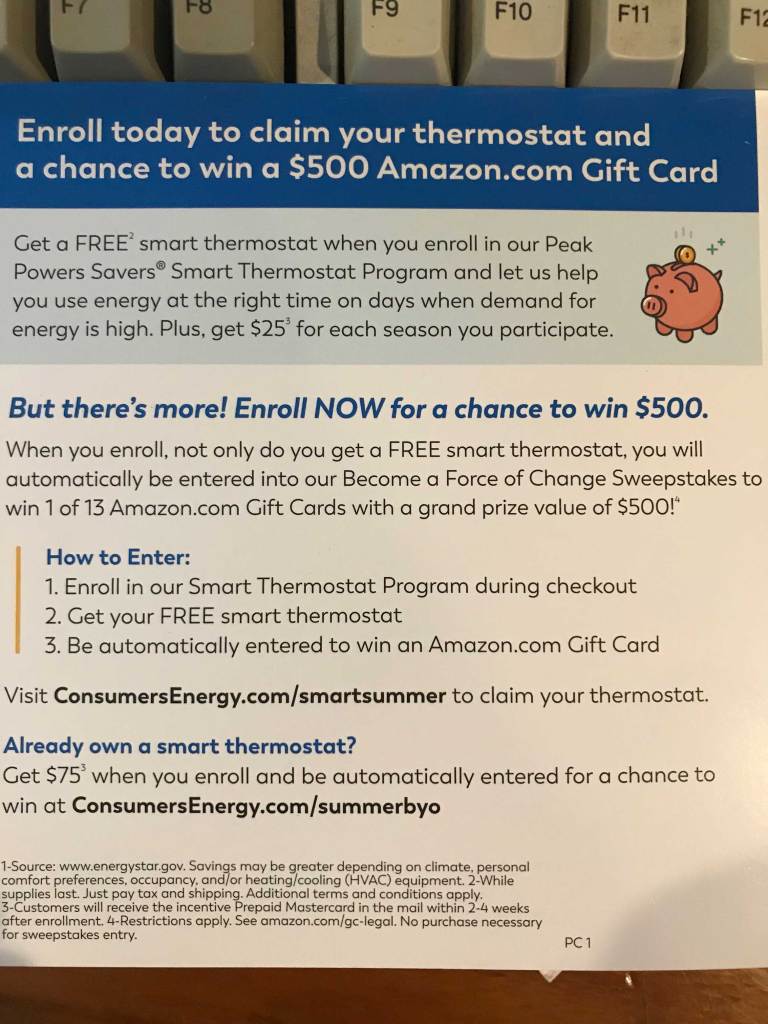