I don’t want an argument about irrelevancies, so let’s stipulate that warming of the earth is a factor in California’s infernos. For our purposes here, it’s irrelevant. Whether it’s anthropogenic or not, California doesn’t control it. What they could control, they leave to chance.

Claims that wildfires started by lightning can be ameliorated today in California by achieving tenths of a degree reductions in global temperature by the year 2050 are facially specious. California’s only proven anthropogenic wildfires came from arson, poorly maintained power lines, and gender reveal parties.

In the gripping hand, we have technology to mitigate wildfire. And we know that California refuses to employ it, even as science tells them they should. Decreasing the amount of fuel available to a wildfire and creating clear-cut firebreaks are within the direct control of California. Eliminating CO2 and cow farts world-wide are not.

Propublica, no right leaning climate denier site, tells us the extent of this failure. They Know How to Prevent Megafires. Why Won’t Anybody Listen?

Academics believe that between 4.4 million and 11.8 million acres burned each year in prehistoric California. Between 1982 and 1998, California’s agency land managers burned, on average, about 30,000 acres a year. Between 1999 and 2017, that number dropped to an annual 13,000 acres. The state passed a few new laws in 2018 designed to facilitate more intentional burning. But few are optimistic this, alone, will lead to significant change. We live with a deathly backlog. In February 2020, Nature Sustainability published this terrifying conclusion: California would need to burn 20 million acres — an area about the size of Maine — to restabilize in terms of fire.

Now, it’s not as if California lacks deep, ongoing experience with wildfires. And they do indeed know what to do. Here’s a blurb from the CAL FIRE website about plans submitted to the Governor in 2019. Emphasis mine:

Using locally developed and vetted fire plans prepared by CAL FIRE Units as a starting point, CAL FIRE identified priority fuel reduction projects that can be implemented almost immediately to protect communities vulnerable to wildfire. Socioeconomic characteristics were also considered, including poverty levels, residents with disabilities, language barriers, residents over 65 or under five years of age, percent non-white, and households without a car. [Decide for yourself which of those criteria are best addressed so as to prevent widespread conflagrations.]

Through this process 35 priority projects were identified, reducing risk for over 200 communities. Project examples include removal of hazardous dead trees, vegetation clearing, creation of fuel breaks and community defensible spaces, and creation of ingress and egress corridors.

As Governor, if you sincerely believed climate change was THE major factor in your well established wildfire problem, and knew you had little control over that, is it prudent to ignore the means of significant mitigation your advisors recommend, or is it better to have an excuse for having ignored the advice?

I’d like to assure you that all 35 CAL FIRE proposed fire break/prescribed burn/fuel reduction projects have been completed. CAL FIRE is nice enough to provide a link: 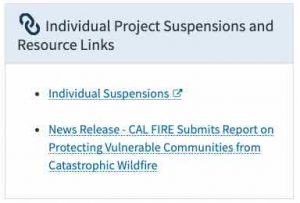 … which leads to the California Natural Resources Agency. Where we get this: 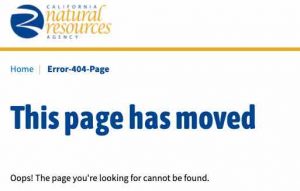 It’s usually easier for bureaucrats and politicians to find a reason not to take an action which requires a decision or represents any immediate risk to their sinecure. Sometimes, though, responsibility avoidance goes pear shaped: The Governor attracts an argument from Donald Trump about it because, you know, California is burning. Then, decisions avoided must be clumsily disappeared.

Back to the Propublica article:

“[P]lanning a prescribed burn is cumbersome. A wildfire is categorized as an emergency, meaning firefighters pull down hazard pay and can drive a bulldozer into a protected wilderness area where regulations typically prohibit mountain bikes. Planned burns are human-made events and as such need to follow all environmental compliance rules. That includes the Clean Air Act, which limits the emission of PM 2.5, or fine particulate matter, from human-caused events. In California, those rules are enforced by CARB, the state’s mighty air resources board, and its local affiliates. “I’ve talked to many prescribed fire managers, particularly in the Sierra Nevada over the years, who’ve told me, ‘Yeah, we’ve spent thousands and thousands of dollars to get all geared up to do a prescribed burn,’ and then they get shut down.” Maybe there’s too much smog that day from agricultural emissions in the Central Valley, or even too many locals complain that they don’t like smoke [Ed: Well how do you like the smoke you’ve got now?]. Reforms after the epic 2017 and 2018 fire seasons led to some loosening of the CARB/prescribed fire rules, but we still have a long way to go.”

It’s natural to want the beauty of nature to go undisturbed. In California it’s become natural to assume man’s limited mastery of nature is sufficient to create a wildfire safe space through the power of imagination. And you might well believe this if you aspire to effect a global change in the composition of the atmosphere from your San Francisco penthouse by forcing rolling blackouts on the unwashed.

The chemistry of fire is an objective fact, which probably makes it patriarchal and colonialist. Still, It Burns.

One thing we can say is that the extent of California wildfires have an anthropogenic origin. We can name names.

Lomberg, author of The Skeptical Environmentalist, Cool It, How to Spend $75 Billion to Make the World a Better Place, and False Alarm, is a “lukewarmer”.

“Lomborg thinks global warming is real, man-made, and a serious problem, which can be and needs to be tackled. But he disputes that it is an existential risk, or indeed our biggest challenge.“.

“[C]limate alarm causes nothing but anxiety and bad policies, arguing we can do better with smarter solutions to the problem…. If climate change really could end the world, then perhaps this alarmism might be warranted, but that is simply not the case.“.

Climate change panic policy today boils down to limiting access to cheap energy, (women, children, and the poor hit hardest) and promoting alternative energy sources (subsidizing Warren Buffets windmills- he should pay more taxes by foregoing the subsidies). Since energy = wealth, opposing zero-emission nuclear power tells you all you need to know about the actual motives of Big Green.