Is free speech under assault on college campuses? Well, some people, including President Trump, think not.

Most of those skeptics promote a distinction between free speech and “hate speech,” a term Mr. Zuckerberg has yet to define for us; but he’s working on an AI to apply the definition he comes up with: Once all those messy linguistic, contextual, semantic issues humans can’t even deal with are programmed.

That is, he dreams of automating enforcement of Silicon Valley values conforming to regulation he’s requested from our technology-naive and Constitutionally slipshod Congressional placeholders. They’ll be looking to erect an emanating penumbra since: No, there’s no “hate speech” exception to the First Amendment. They have to help Mr. Zuckerberg add one.

We can look to George Orwell for insight into how that public/pirate partnership is likely to work out.

“The mind should develop a blind spot whenever a dangerous thought presented itself. The process should be automatic, instinctive. Crimestop, they called it in Newspeak.”
-George Orwell, 1984

A model is already apparent. Google fired James Damore for failure to crimestop. On campus, they’re calling it “self-censorship.”
The Skeptics Are Wrong Part 2: Speech Culture on Campus is Changing 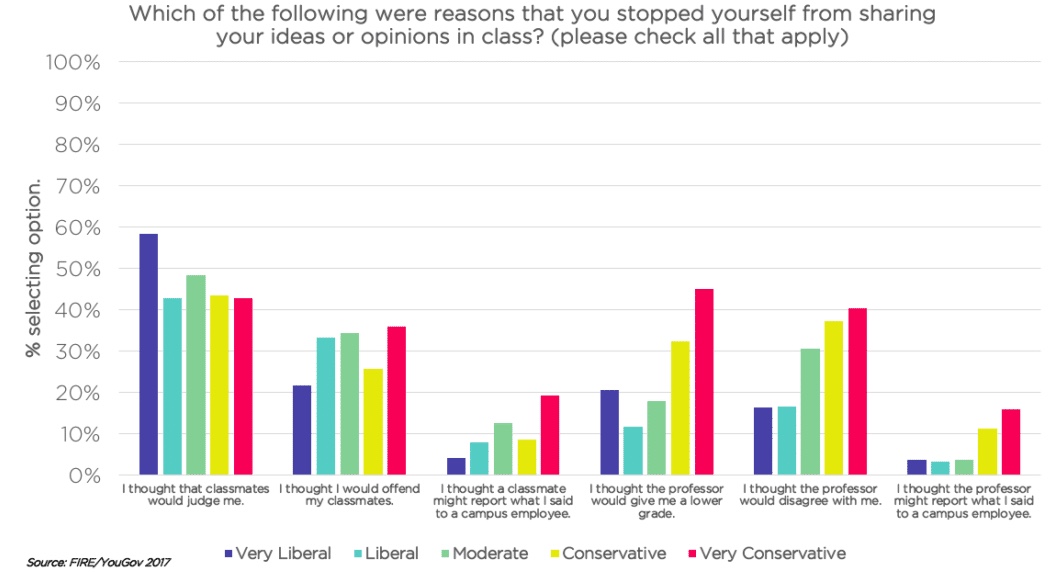 Very Liberal students care far less about giving offense than about being judged. That is, they worry more about tribal membership in-good-standing and find it implausible their opinions would offend anyone. A collectivist approach.

Conservative students are much more concerned about campus thought police than Liberal students. I would have liked to see them less concerned about giving offense to peers as an indication of individualism, but they know they are surrounded by a great number of people who easily take offense. And they are probably just more polite.

I’m sure you can infer other interesting theories yourself, but the result is not good for any of these students: The Stifling Uniformity of Literary Theory

One wonders whether the students that the academy is producing today could if asked to, provide the arguments of their ideological or political counterparts, without resort to crude caricature or ad hominem…What might a course look like if a race theorist such as Derrick Bell was studied alongside someone like Thomas Sowell? For about thirty years both Bell and Sowell were consistently among the top five most cited black scholars in American Academia according to The Journal of Blacks in Higher Education.12 However, as with so many prominent intellectuals, while Sowell is revered among classical liberals, libertarians and conservatives, he is practically unheard of on the left, despite his pioneering work on the economics of race and ethnicity.13 To borrow Jonathan Haidt’s phrase, liberal intellectuals are in danger of being ‘blind’ not only to the other side’s moral taste buds, but also to their most important thinkers.14

Here’s another post I think helps explain why Liberals don’t like free discussion of ideas. They mean well, but can’t be bothered to examine consequences in their quest to perfect the rest of us.