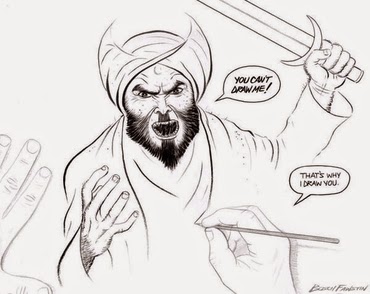 The First Amendment is a staple topic of this blog. I highly recommend ‘reading the whole thing’ for all the following:

The Washington Post offered the celebrated headline “Event Organizer Offers No Apology After Thwarted Attack In Texas”, while the Associated Press went with “Pamela Geller says she has no regrets about Prophet Muhammad cartoon contest that ended in 2 deaths”. The media “narrative” of the last week is that some Zionist temptress was walking down the street in Garland in a too short skirt and hoisted it to reveal her Mohammed thong – oops, my apologies, her Prophet Mohammed thong (PBUH) – and thereby inflamed two otherwise law-abiding ISIS supporters peacefully minding their own business.

It’ll be a long time before you see “Washington Post Offers No Apology for Attacking Target of Thwarted Attack” or “AP Says It Has No Regrets After Blaming The Victim”. The respectable class in the American media share the same goal as the Islamic fanatics: They want to silence Pam Geller. To be sure, they have a mild disagreement about the means to that end – although even then you get the feeling, as with Garry Trudeau and those dozens of PEN novelists’ reaction to Charlie Hebdo, that the “narrative” wouldn’t change very much if the jihad boys had got luckier and Pam, Geert Wilders, Robert Spencer and a dozen others were all piled up in the Garland morgue…

“Stay quiet and you’ll be okay:” Those were Mohammed Atta’s words to his passengers on 9/11. And they’re what all the nice respectable types are telling us now.

The First — and a Half — Amendment
-Victor Davis Hanson

If a Christian cake decorator does not wish to use his skills to celebrate gay marriage — an innovation that both Hillary Clinton and Barack Obama opposed until very recently — on a wedding cake, then he is rendered a homophobe who must be punished for not using his artistic talents in the correct way.Note that we are not talking about nondiscrimination concerning fundamental civil rights such as voting, finding housing, using public facilities, or purchasing standard merchandise. Meanwhile, are we really prepared to force gay bakers to decorate Christian wedding cakes with slogans that they find offensive or homophobic? Or to insist that an Orthodox Jewish baker must prepare a cake for a Palestinian wedding featuring a map of the Middle East without Israel? Or to require a black-owned catering company to cook ribs for a KKK group? Instead, radical gays demand the exclusive right to force an artist — and a cake decorator is an artist of sorts — to express himself in ways that they deem correct.

Without free speech, the United States becomes just another two-bit society of sycophants, opportunists, and toadies who warp expression for their own careerist and political agendas. How odd that we of the 21st century lack the vision and courage of our 18th-century Founders, who warned us of exactly what we are now becoming.

The belief that free speech rights don’t include the right to speak offensively is now firmly entrenched on campuses and enforced by repressive speech or harassment codes. Campus censors don’t generally riot in response to presumptively offensive speech, but they do steal newspapers containing articles they don’t like, vandalize displays they find offensive, and disrupt speeches they’d rather not hear. They insist that hate speech isn’t free speech and that people who indulge in it should be punished. No one should be surprised when a professor at an elite university calls for the arrest of ‘Sam Bacile’ [who made the YouTube video The Innocence of Muslims] while simultaneously claiming to value the First Amendment…”On today’s campuses, left-leaning administrators, professors, and students are working overtime in their campaign of silencing dissent, and their unofficial tactics of ostracizing, smearing, and humiliation are highly effective. But what is even more chilling—and more far reaching—is the official power they abuse to ensure the silencing of views they don’t like. They’ve invented a labyrinth of anti-free speech tools that include “speech codes,” “free speech zones,” censorship, investigations by campus “diversity and tolerance offices,” and denial of due process. They craft “anti-harassment policies” and “anti-violence policies” that are speech codes in disguise.

Sadly, it hardly ends there. These excerpts touch only three of the more egregious offenders. Other enemies of the First Amendment are left unmentioned. For example, radical feminists, CAGW ‘settled science’ zombies and the IRS.