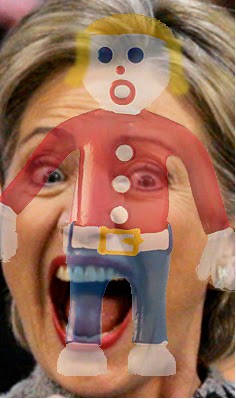 I must admit I never understood why people thought SNL’s Mr. Bill feature was funny, but it does provide a vehicle for poking fun at Mrs. William Jefferson Clinton.

*President Clinton’s predations long predate the bimbo eruptions phase and were so egregious that Mrs. Bill could not possibly have been unaware of them. In a 2012 PBS documentary, Clinton’s Arkansas Congressional campaign (1974) manager Paul Fray said of president Clinton:

I mean you got to understand at one time there was at least 25 women per day coming through there trying to find him, and I’d tell them he’s out on the road, you know and they’d get out the door, but lord it was bad. Bad, bad, bad, bad, bad.

Mrs. Bill’s claim to have been blindsided by the Lewinsky affair over 20 years later should be considered in that context. She sold her dignity for power. As the foreign contributions to the Clinton Foundation demonstrate, that’s not all she’ll sell.