At Slate, Beverly Gage asks “Why Is There No Liberal Ayn Rand?“

Ask Republican vice presidential nominee Paul Ryan how he became a conservative and he’ll probably answer by citing a book. It might be Ayn Rand’s Atlas Shrugged. Or perhaps he’ll come up with Friedrich Hayek’s Road to Serfdom, or even Barry Goldwater’s Conscience of a Conservative. All of these books are staples of the modern conservative canon, works with the reputed power to radicalize even the most tepid Republican. Over the last half-century, they have been vital to the conservative movement’s success—and to liberalism’s demise.

We tend to think of the conservative influence in purely political terms: electing Ronald Reagan in 1980, picking away at Social Security, reducing taxes for the wealthy.

You might as well ask why there’s no “Liberal” John Galt. A question you couldn’t ask if you’d bothered to pay attention to certain compelling arguments from your opposition. Even if the ideas weren’t compelling to you, would the demands of diversity not require you to attempt to understand? Would not a reasoned defense of your own ideas demand it?

And here the answer is again – in the first sentence of the third paragraph:

Liberals, by contrast, have been moving in the other direction over the last half-century, abandoning the idea that ideas can be powerful political tools. This may seem like a strange statement at a moment when American universities are widely understood to be bastions of liberalism, and when liberals themselves are often derided as eggheaded elites. But there is a difference between policy smarts honed in college classrooms and the kind of intellectual conversation that keeps a movement together. What conservatives have developed is what the left used to describe as a “movement culture”: a shared set of ideas and texts that bind activists together in common cause. Liberals, take note.

But it’s yet more subtle than that. First, the tea party people needed no institutional bastion of conservatism, controlled by an insular elite, to “re-educate” them. They’d have a hard time finding one if they did. They didn’t need the ivory tower re-education camps in the first place. They get it innately. They fundamentally understand it. When they read Ayn Rand, they can see today’s headlines. Our president’s success as a community organizer doesn’t make them swell with pride. Rather, it reminds them of Wesley Mouch.

Liberals have channeled their energies even more narrowly over the past half-century, tending to prefer policy tweaks and electoral mapping to big-picture thinking. When was the last time you saw a prominent liberal politician ascribe his or her passion and interest in politics to, of all things, a book? The most dogged insistence on the influence of Obama’s early reading has come from his TeaParty critics, who fume constantly that he is about to carry out a secret plan laid out a half century ago by far-left writers ranging from Alinsky, the granddaddy of “community organizing,” to social reformer Frances Fox Piven.

Liberals may argue that they are better off knocking on doors and brainstorming policy than muddling through the great works of midcentury America.

Policy without theory is untestable, and I can see why “Liberals” would consider that a strength. It allows them the excuse that without Obama’s stimulus the unemployment rate he promised wouldn’t go over 8%, but hit 10% (and more), deserves a Mulligan. He meant well.

And that Obama predicted the unemployment rate, with stimulus, would now be 5.6% is irrelevant. Get that? Not below 6%, but 5point6%. This is the same administration that quibbled over whether an unemployment rate of 8.254% should be reported as 8.3%.

So much for the precision wisdom of the centralized planners. You know, those very same people who turn out to be even more wrong than our president… in some book written by Ayn Rand.

Nothing to see here about testing ideas, let’s just MoveOn: 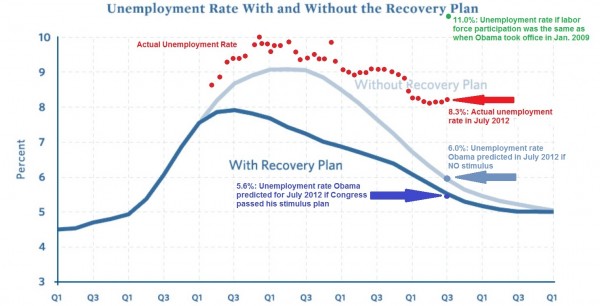 Some of this imbalance is due to the relative weakness of the current American left. Liberals are not the logical counterweight to conservatives; leftists are, but they are few in number.

Some of this perceived imbalance is due to self delusion. Nancy Pelosi, Harry Reid, Barack Obama (who, as a teen, was mentored by an avowed Communist, wrote about hanging out with Marxists in college and who, in 1996, received the endorsement of the Chicago branch of the Democratic Socialists of America), Bernie Sanders, Maxine Waters, Barbara Boxer and Debbie Wossname-Schultz are not left? The self-declared Communist (Van Jones) and admirer of Mao (Anita Dunn) whom Obama appointed to positions of power were not left? Please.

And, finally, a note is required on the lead sentence of the closing paragraph:

In the current election this means that liberals also run the unnecessary risk of ceding intellectual authority to the right.

Excuse me, but this is the risk Liberals continually choose. They do it gleefully, confident in the ascendance of their intentions, and with no thought about ideas. There is no necessary or unnecessary when peering down from the summit of moral superiority.

This election may represent increased risk for those who don’t have, or care about, ideas; but they don’t care enough to read Atlas Shrugged or Capitalism and Freedom to find out about the ideas that oppose them. Many of us who’ve read Atlas, have also read Das Kapital and Rules for Radicals and The Black Book of Communism. We have some idea what we’re up against, and, unlike Ms Gage, we can even name Liberals we used to consider serious thinkers. We were wrong, but we could say why.