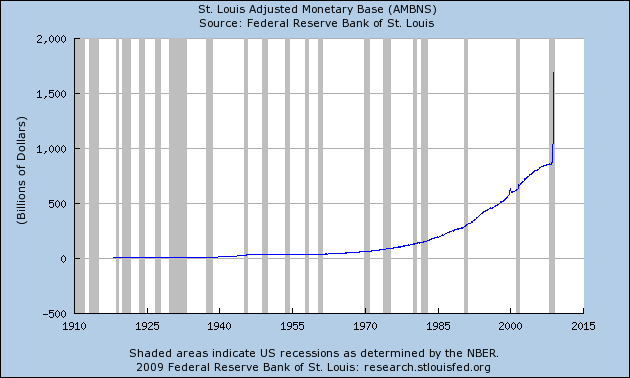 That’s essentially a picture of the activity of the high-speed rotary intaglio printing presses at the Bureau of Engraving and Printing spitting out 32 notes to the sheet around the clock. The outlook is bullish for employment in specialized printing press repair. You can see a tiny sideways blip there just past the 1,000 billion mark where a press must have broken down.

Now, if productivity was generally increasing at the same rate we might be justified in feeling good about all this new money. That would reflect an increase in wealth. However, that’s not what’s happening. What is happening is that the Feds are simply printing money at a rate suggestive of 1930’s Weimar and present day Zimbabwe. AND, that chart does not reflect the trillion dollars these idiots are getting ready to dump into potholes, mob museums, more special bank bailouts, pregnancy prevention/termination and all other manner of corrupt, vote buying swill. The promoters are elected officials who can’t be depended upon to pay their own taxes or reject bribes. These guys would have embarrassed Nero, even while he fiddled. They’re writing the “stimulus” bill.

Despite evidence that such stimulus, especially when combined with anti-competitive labor regulations (denying a secret organizing ballot, for example) actually extends economic downturns, the Feds are preparing for a “public works” funding extravaganza never before witnessed. This is uncharted territory. We can be certain only that the grandchildren of our grandchildren will be beggared. But there’s an always an election coming, so the money they’re magically creating is calculated to increase dependence on government, not help the economy. Unaffordable handouts now, leading to decreasing individual economic choice, are just the thing.

Any other country would have had to devalue its currency and severely reduce spending. We’ve been lucky because our markets have been freer, and our people less burdened by taxes and regulation than the rest of the world – and the Chinese have lent us a lot despite our governments’ profligacy. Our special status in that regard is about to end.

1 thought on “The Roadmap to Serfdom”