Jack Hoogendyk’s blog Core Principles is a recent blog roll addition. Jack has blogged from the floor of the legislature during the recent Democrat tax increase and has interesting insights.

Recommended, not least because of posts like this, which I repeat in full:

Here is a note from an alert reader:

The presumed Democratic nominee, Senator Hillary Clinton’s platform is to give more power to the unions and to raise taxes for the entire country. The business owners of Michigan support Hillary because we believe it’s high time for the rest of the nation to start competing with Michigan on a “level” playing field.

I think that should have been “leveled,” or “razed.”

While we’re talking about taxes, it gives me an opportunity to use this chart from an article at the Cato Institute. 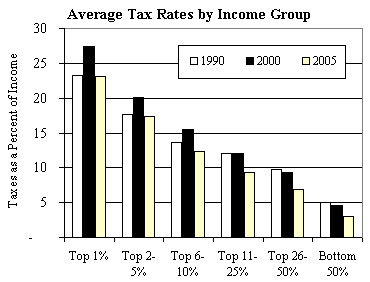 Tax rates on those with high incomes are far greater than for other Americans. Folks at the top pay about 25% of their income in federal income taxes, which compares to less than 5% for half of the population at the bottom end.

For the top two groups, the tax rate in 2005 was about the same as 1990. Essentially, the Bush tax cuts just reversed out the Clinton tax increases on these folks.

The Bush tax cuts substantially reduced tax rates for people in every income group. Indeed, those at the bottom had the largest relative reductions in their tax rates.

Hillary will put more tax burden on the group who create employment, just like Michigan Democrats. Here’s another Core Principles link on the subject, A note from an exasperated business owner

1 thought on “Level has more than one meaning”