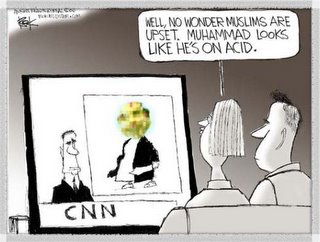 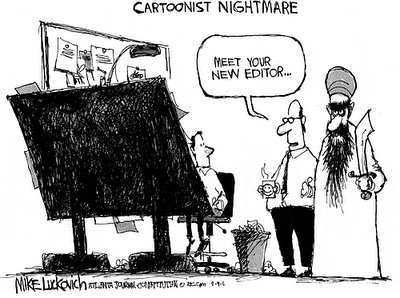 OK, we know the media refuse to get it, but even your average editor should be able to understand these 2nd generation cartoon-jihad cartoons.

How can people know how over the top the Islamofascist reaction is without the FACTS?

In Canada, The Western Standard has published the Danish caricatures of Mohammed and the results are predictable:

The Canadian Islamic Congress has vowed to seek hate-crimes charges against the magazine on the grounds that the cartoons incite hatred and portray Muslims in a negative fashion.

“I think there is a fine line between freedom of the press and freedom to incite hate. These cartoons cross that line,” said Mohamed Elmasry, the CIC’s national president. “Canada has a hate literature law and we will be able to test it to see indeed if the law protects the well-being of minorities.”

And last, but far from least, Government idiots:

Defence Minister Gordon O’Connor warned the latest edition of the Calgary-based Western Standard, which features cartoons that have sparked riots and protests worldwide, will put Canadian troops in Afghanistan at greater risk.

“It doesn’t help. Radicals in Syria and Lebanon, Afghanistan and Iraq, they get people roused up because their religion’s being offended,” Mr. O’Connor said in an interview. “We don’t need any more risk in the area than we have.”

First, assume this is true. It might take some combat pressure off our allies, the Danes. This seems only sporting, since Mr. O’Connor is apparently unwilling to support them via a free press.

Second, Mr. O’Connor might wish to recall how gently Canada was treated at Dieppe before the worst of those insensitive cartoons of Hitler were printed. It would have been worse if the Germans had seen caricatures of Hitler; and sure, Bataan wouldn’t have happened if we hadn’t depicted Tojo with buck-teeth. What were we thinking?

The jihadists are spurred to effective effort by some cartoons, several of which they have to fake up. Gordon O’Connor ought to read what he said if he’s worried about either making sense or insulting people.

He could be facing hate crime charges.

Rounding out today’s litany of scimitar submission, we have other commentary:

Media’s cowardice pales next to politicians’
BY JOHN O’SULLIVAN

What European governments foresee in their future is a terrible combination of economic difficulties, political battles and ethnic hostilities. In order to keep social conflict to a minimum, they now seek to establish rules that would prevent the different groups in a multicultural society from insulting each other. And the cartoon battle is the first skirmish they have engaged in.

But it is difficult to recall a greater blow to the credibility of American news media than their near-universal refusal to publish the Mohammed cartoons originally published in a Danish newspaper that have brought about worldwide Muslim protests.

This loss of credibility owes to two factors: dishonesty and cowardice.

Islamic Chauvinism and the Mohammed Cartoons
By Joseph Tartakovsky

Islamic chauvinism explains why Arab journalists, who continuously lament the censorship in their presses, now demand that European states punish privately owned newspapers. It explains how the Saudi ambassador to the U.S., Prince Turki al-Faisal, can tell Wolf Blitzer that matters of faith must “be handled with care and with sensitivity,” when the country he represents outlaws wearing a cross or possessing a Bible. Danish Muslim leaders, who appealed abroad to bring down Islamic wrath on their adopted country, decry Denmark’s coolness toward its Muslim minority*but they have not urged the thousands of Muslims now queuing up for immigration into tiny Denmark to shred their asylum applications in disgust. This is not hypocrisy. It is strategy.

Such chauvinism does not explain Al Gore’s, well yes… treason… but that explanation is probably asking too much of anyone, especially the jihadi.

By any measure, Mr. Frattini’s rhetoric is nothing more than an Orwellian attempt to pretend that moral cowardice is actually social responsibility. Permitting a governmental entity like the European Commission to act as a political facilitator guiding journalists on matters of “prudence” or context should be anathema to all people in free societies. The real goal of this proposal and others like it is to appease violent terrorists who have seized upon the publication of the Muhammad cartoons as a pretext to riot or — as apparently was the case with the Iranian and Syrian governments — to encourage others to do so.

Finally, we need to note the sharp attention to issues from the White House Press corps over the last two days. They’ve just spent 48 hysterical hours demanding to know why they weren’t informed immediately about the Vice President’s hunting accident.

This firm grasp of the crucial issues of the day, this narcissism squared- a press story about the press – while the Islamofascists riot, Iran restarts uranium enrichment and Helen Thomas still hasn’t got a front row seat at press conferences, just shows you the keen grasp they have of what’s important.

And, these are the people who are exempt from McCain Finance Reform.

1 thought on “The fort’ estate – Hunker down”