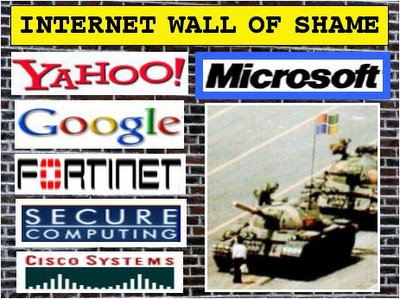 If this guy could personally face down a tank of one of the most brutal totalitarian regimes in existence, what’s with with those huge American companies?

* Since 2002, Yahoo! has agreed to censor the results of the Chinese version of its search engine in accordance with a blacklist provide [sic] by the Chinese government. Reporters Without Borders also recently proved that Yahoo! helped the Chinese police identify and then convict a journalist who was criticising human rights abuses in China. The e-mail servers of Yahoo!’s Chinese division are located inside China.

* Microsoft censors the Chinese version of its MSN Spaces blog tool. You cannot enter search strings such as “democracy” or “human rights in China” or “capitalism” as they are automatically rejected by the system. Microsoft also closed down a Chinese journalist’s blog following pressure from the government in Beijing. This blog was hosted on servers located in the United States.

* All sources of news and information that are censored in China have been withdrawn by Google from the Chinese version of its news search engine, Google News.

* Secure Computing has sold Tunisia technology that allows it to censor independent news and information websites such as the Reporters Without Borders one.

* Fortinet has sold the same kind of software to Burma.

* Cisco Systems has marketed equipment specifically designed to make it easier for the Chinese police to carry out surveillance of electronic communications. Cisco is also suspected of giving Chinese engineers training in how to use its products to censor the Internet.

Try using Ask Jeeves for searches. Google and Yahoo! need a message about markets and freedom.

Seriously consider Linux, or a Macintosh, instead of Windows. Try D-link instead of Linksys (a Cisco division) for home use routers.

Note: this blog depends on Google’s free “Blogger” offering. I am considering alternatives.